(Cattle God)
(Cowra)
Cowra (カウラ Kaura)[1] is one of Yapool's many Terrible-Monster from Ultraman Ace. He appeared in episode 16. A Terrible-Monster that came into existence after Yapool cursed a human into transforming into the bovine beast, Ace was able to successfully reverse the transformation. Despite Cowra effectively ceasing to exist, Yapool was later able to utilise the monster's soul in the creation of Jumbo King.

Originally Takai, a man whom picked a nose ring and wear it, he was cursed by a man in purple to become Cattle God. Later, he realized that he was slowly turning into a half man, half-cow creature, and went back the the Nose Ring Hill where he stole the nose ring earlier and asked for forgiveness. This was to no avail as the mysterious man in purple turned him into Cowra and ordered it to feed on humans. The next day, villagers made a prayer to stop Cowra's reign of terror but the mysterious man disrupted it and sets Cowra on rampage again. Hokuto and Minami transformed into Ultraman Ace and battled the Terrible-Monster. Yoshimura noticed the nose ring at Cowra's right hand and ordered Ace to remove it. He does so by kicking it out, then materialised a nose ring on Cowra's nose before he throw the Terrible-Monster as it turn back into Takai. The man thanked TAC and Yoshimura as he resumed his normal life as a farmer. Summer of Horror Series - Ghost Story! Cow God Man

In the finale of Ultraman Ace, Cowra along Unitang, Mazaron Man, and Mazarius returned as ghosts and were combined into the strongest, final Terrible-Monster Jumbo King by Yapool. Tomorrow's Ace Is You!

The Cattle God (牛神 Ushigami), also known as Bullman (バルマン Baruman) is Takai's pre-mutation form before the Cowra transformation completed. This was form upon when the man in purple fused Takai with the souls of the cow's grudges.

Using the data of Cowra's Spark Doll, a cybernetic/artificial version of it was created and contained in a Cyber Card, namely Cyber Cowra (サイバーカウラ Saibā Kaura). 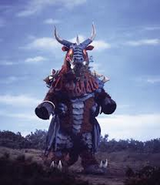 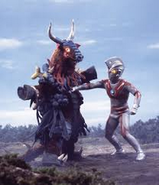 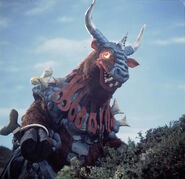 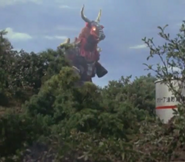 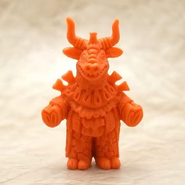