None
Cotton-Poppe (コッテンポッペ Kotten-Poppe) is a Kaiju that appeared in the film, Ultraman Zearth. He is the bodyguard of Alien Benzene. His actual name is Gold Bomber (ゴルドルボムルス Gorudoru Bomurusu) as referred to by Benzene; Mydo merely christened him with the former name instead.

Benzene's personal invasion monster, Cotton-Poppe was tasked with stealing Planet Earth's gold to treat his master's illness, and also to protect him should Earth mount a resistance to his plans to invade afterwards. After a long and difficult battle in which Zearth was unable to use his Spachouchoura Beam on Cotton-Poppe, lest he explode with the force of a nuclear bomb, Zearth was eventually able to subdue the monster and take it into orbit, where he was able to destroy it harmlessly.

Cotton-Poppe was the weapon and bodyguard of Alien Benzene in his plan to kill Ultraman Zearth and to steal all of Earth's Gold in order to cure his illness. Cotton-Poppe's presence was felt all over the Earth by several different countries as he consumed mass quantites of them with his tongue. MYDO set up a trap to try and stop the monster from one of its gold raids, but ultimately was taken down by the monster's spike lightning and Cotton-Poppe again fed on more gold. One night while MYDO was investigating, they found the monster transfer its gold contents as energy waves to his master, but it was only just enough to temporarily cure Alien Benzene of his illness and so he sent Cotton-Poppe to begin phase 2 of his plan.

In this parody skit, Cotton-Poppe is portrayed as one of Alien Benzene's forms. Ultraman Zearth: Parody Chapter 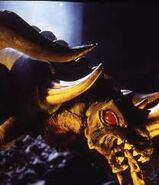 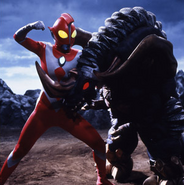 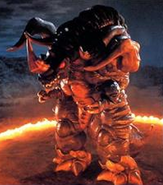