Still in use
The Cosmo Pluck (コスモスプラク Kosumosu Puraku) is a transformation item used by Musashi Haruno to transform into Ultraman Cosmos.

Before becoming the Cosmo Pluck, the device took the form of the Pyroxene stone (Cosmo Stone), a stone given to Musashi when he was a child by the blue giant himself. The purpose of the stone was the same as the Ultra Star stone seen in Ultraman Tiga, to summon its Ultra owner from whatever part of the universe.

Musashi kept it as a child and as he grew up taking care of tame monsters he used it to bond and calm down the monster Lidorias. When she was taken over by the Chaos Header Virus, Musashi tried to use it to calm her down and initially succeeded but she was attacked by the SHARKS and reverted to her mutated state. Musashi's plane was shot down, but Cosmos, sensing the danger swooped down from space and merged with him.

After Musashi showed his resolve to save the monsters, the stone morphed into the Cosmo Pluck allowing him to transform at will (as long as Cosmos allows it).

When it was still the gem, when Musashi first summoned Cosmos, he was shown like blooming from a flower then Cosmos just stands up. When it was already the Cosmo Pluck, Musashi raises the Cosmo Pluck and shouts "Cosmos!" and a flash of light envelops Musashi and transforms him into Cosmos's default form of Luna mode. At times Musashi has just used it in a similar fashion to the Beta Capsule without shouting. Other times Musashi has transformed without saying a word but the word Cosmos could still be heard, implying he was saying it in his mind or it was there to be cinematic. 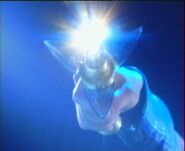 Taiyo as Musashi as a ZAP Spacy member, with his Cosmo Pluck raised.
Bahasa Indonesia
Community content is available under CC-BY-SA unless otherwise noted.
Advertisement