Ultraman Taro episode 2 "This Time It's Mother of Ultra"

Cosmo Liquid (コスモリキッド Kosumo Rikiddo) is the first of the new age of Kaiju to be born. It appeared in episodes 2 and 3 of Ultraman Taro.

After the destruction of Astromons at Ultraman Taro’s hand, Cosmo Liquid was the first Kaiju to appear, confirming that a new age of monsters had begun. The merciless man-eating Kaiju made its grand entrance in the mountain region of Tamagawa where it fed on several people.

Kotaro Higashi saw it from a distance and fired on it, but by the time he and another ZAT member got to the spot the creature was standing, there was no trace of it or the weapon. Not long after, Cosmos Liquid made its new home in one of Japan’s cities, existing in the water of a flowing river! After a young boy found the weapon, ZAT knew exactly where to strike and how.

They charged the river with electricity, forcing the creature to take its true form. It was met with massive amounts of punishment from the forces, but wasn’t going down. Kotaro soon transformed into Ultraman Taro. As the fight raged, Cosmo Liquid’s foot got stuck in Live King's pit. He quickly reduced himself to liquid form and was sucked inside the underground Live King’s body. Not long afterward, Kotaro fell into the pit while looking for a friend's pet dog. His movements inside made the monster reveal itself and his transmissions let the rest of ZAT know where he was.

A plan was put underway to force whatever the creature had devoured out last was put into effect and its body was punctured with a spear-like weapon that sprayed out Cosmos Liquid in its green, liquid state. Angry at Live King for eating him, the monster reformed and attacked, bludgeoning him with fists of fury, yet, it had little effect Live King, who only kept laughing. The fight grew out of hand fast, but when it was revealed that there could be a possibility of saving Kotaro from Live King by making it sneeze, a dust-like spray was dropped from the sky by one of the planes. Both Live King and Cosmo Liquid began sneezing and soon Live King spewed Kotaro out of its nose. Back in action, he quickly transformed into Ultraman Taro, as both Kaiju quickly attacked him. As his time ran out, he fired his Ultra Freezer, freezing both Kaiju solid. Cosmo Liquid was then shattered and permanently destroyed when one of the ZAT aircraft smashed its frozen body with a spiked wrecking ball. 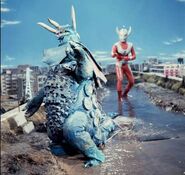 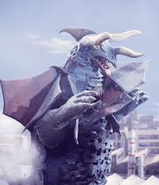 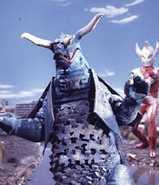 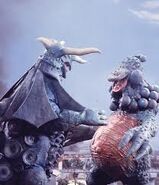 Figure of Cosmo Liquid, by Bullmark. 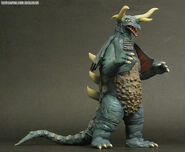 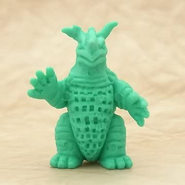