Only one such member of Compoid to appear, namely Unison (ユニゾン Unizon), who's identified by the treble clef-like emblem on her dress and worked as a "Spirit of the Sound" (音の精霊 Oto no Seirei). Unison appeared at the climax of the episode to prevent Gridman from killing Anosillus stating that the monster simply went berserk from a contaminated music. She tried to purify the monster with her music, but Takeshi disarm her from her baton. Yuka gets the idea to play through Ippei's keyboard and purify Anosillus with her music, allowing the monster to undo the damages done to Sakuragaoka. As a token of appreciation, Unison and Anosillus installed a combination program into the Barrier Shield to combine with the Plasma Blade into the larger Gridman Sword.

During Zegga's rampage, Alexis・Kerib explained to Rikka that the entire citizens of Tsutsujidai were Repli-Compoids (レプリコンポイド Repuri Konpoido), artificial humans created by Akane to inhabit her virtual town as part of her escapism from reality. However as each Repli-Compoids are sapient beings on their own, Akane created monsters to eliminate those she deemed unworthy or had wronged her in certain ways, for example killing Sakiru's team of volleyball club members while having the Venoras cleansing the city after each operation to cover the damages and removing the murdered Repli-Compoids' memories from its citizens.

Akane added that despite the numerous atrocities she had done, the Gridman Alliance members are incapable of hating her as their programming forbid them to do so. After being restored to full power, Gridman's Fixer Beam not only fixed the damages on Tsutsujidai, but also converted the entire Computer World into a copy of the planet Earth itself. 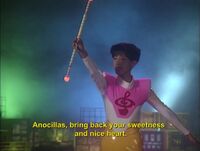