A robotic monstrosity from a distant world destroyed by poor stabilization, Combugon flew into space and crashed into a satellite, consuming the electronic components inside. After being fired at by the space division of the Scientific Defense Guard, Combugon fell to Earth and was buried deep under the ground where its cybernetic body slowly grew larger. As mankind flourished above its head, the strange creature eventually matured and burst from the ground, tearing through buildings and killing hundreds. The Scientific Defense Guard was on the defensive, but the beast fired back with its lasers, blasting their weapons out of the sky.

Choichi soon became Ultraman Joneus to battle and challenge the cybernetic killer. The monster used its tentacles to its fullest, throwing Jonias to the ground and trying to pull a skyscraper down on his head. The hero caught the structure with his legs, saving those trapped inside before standing up and getting behind Combugon. The hero smashed his fist through its fake skin, ripping out a handful of circuitry! Unable to move, the beast was helpless as Jonias unleashed his Planium Ray, destroying the alien machine once and for all. 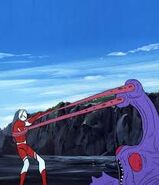 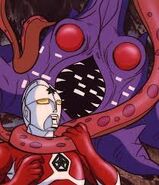 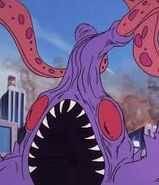 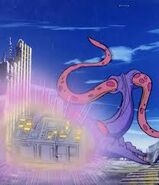 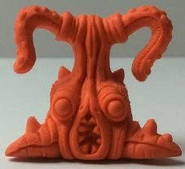 A Combugon eraser
Community content is available under CC-BY-SA unless otherwise noted.
Advertisement