TBA
Colorless (カラレス Kararesu) was an Ultra that appears in Ultraman Story 0, he was the teacher of young Ultraman Taro.

During the initial chaos after the Plasma Sun's activation Colorless was one of the Ultras fighting the deluge of monsters that rampaged around the planet. Injured, he was about to be attacked by a monster when Father of Ultra saved him and destroyed the beast. The great Ultra left before Colorless could properly thank him and the weakened warrior found himself healed by the light of another Ultra, a woman who would be known as Mother of Ultra. It was this incident that made him feel deep respect for both of them, both as people and their power.

Colorless was among the Ultras present when the Baltans attempted to snuff out the flames of the Ultra Tower and a sign of supremacy. The flame was saved by the Ultras' combined effort.

Years later Colorless was there when Taro emerged from his gestation tank, fully formed. He was surprised by the intense light the young Ultra was radiating, showing he had great potential and/or power. Colorless became the teacher of the young Ultra and the two eventually found themselves on an alien world fighting terrible monsters. Colorless defeated Dorako in the air while Taro fought Tyrant on the ground. However Taro knew nothing about constraint, his Strium ray destroyed the monster and several hundred city blocks worth of land around him. Taro expected praise for his victory but all he got was a punch to his face. Colorless belittled him on his recklessness and disregard for collateral damage, showing the innocent creatures he had unknowingly killed along with the monster.

Colorless gathered energy from all around him, and revived one of the small animals and restored Taro's energy. While he explained the nature of his ability to Taro the volcano began to erupt and fire flaming debris straight at the Ultras. The pair dodged the attack and flew up high and saw that the volcano was actually a monster.

Taro charged towards the beast blindly, but Colorless got in front of him and protected them both with a curved shield. While Colorless moved out of the way of the next barrage of debris, the slow-witted Taro was struck down. Before his teacher could help him Colorless was swallowed by the monster. There, inside the beast, he went into the fetal position as he erected his fire shield to protect him from the monster's volcanic innards. Inside he began to remember about the time he first met Taro's parents, when his father saved his life and his mother healed his injuries during the chaos after the Plasma Sun's activation.

As he awaited death, he was surprised to find that Taro had rescued him, his kick and forced the creature to throw up it magma stomach juices and him. Colorless watched as Taro used his Strium Beam to destroy the part of the monster's body that it attacked with then take it up into space to destroy it with the Ultra Dynamite. Colorless was most impressed however when Taro returned and used what he had just taught him to restore life to the damaged ecosystem. 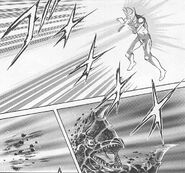 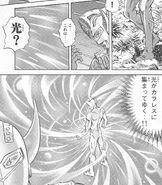 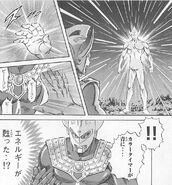 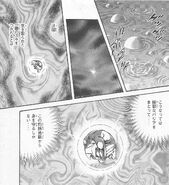 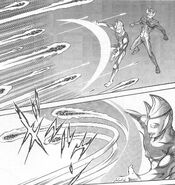