―Clevergon as he detected Child Baltan

Made by Dr. Professor Kensaku Kimoto by using one of the young Musashi Haruno’s toys, Clevergon is a state-of-the-art robot. Flying through the air at impressive speed, equipped with a super computer, and able to extend legs that allow it to stand, it helped greatly around the Haruno household. After one of Musashi's friends was taken over by a Child Baltan, it was Clevergon whom revealed the alien inside.

In the mid credits, the children and Prof. Kensaku praised Clevergon for stopping the missile's countdown. Ultraman Cosmos: The First Contact

Clevergon was given to Shoji, Musashi's childhood friend whose little brother felt depressed due to his being temporarily broken at that time to cheer the kid up. Along with Ayano, Shoji, Shoji's brother and Musashi, Gon tried his best to resurrect Cosmos by shine the giant a sunlight. Eclipse

Sometime later, Musashi took Clevergon for a fix. However, when Chaos Header was aiming for Musashi, Gon took the blow and protect his old friend. In the underground lairs of the SRC Medical Centre, Clevergon was infected with Chaos Organisms. Rising up from the underground lairs, he begin to feed himself on some cars. As EYES tried to attack, Musashi tried to transform, but Cosmos refused, since Clevergon is a robot he can still expel the evil entity but in return it might cost the robot's life since he is not an organic lifeform. After the robot finished stashing loads of vehicles in its body, it went on the move again but stopped for a while via TECCH Thunder's immobilizing missile. Moments later, it reactivated and attack again. This time it was threatening even more lives and as everything Musashi and EYES tried to do to stop it failed, Cosmos finally came to battle. Walking through its energy beams and as explosions leaped all around the guardian, he went Eclipse Mode and used his Cosmium Beam to hit the infected CPU core of its brain. The chaos was defeated and the body began to fall apart and vanish until just the normal-sized Clevergon remained. Rescue Gon

As three giant Gigi (Progress) overpowered Ultraman Cosmos, Gigi Dr. XX01, on the side of humans, used her size-changing ray to increase Clevergon’s size. Now a giant, it knocked one of the three soldiers down, allowing Cosmos to free himself from their energy ropes and defeat the invaders. Watching on, Clevergon Giant was returned to its normal, toy size by Cosmos' Cosmo Kausa. Gigi vs Gon 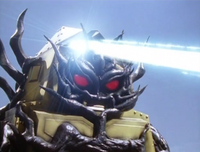 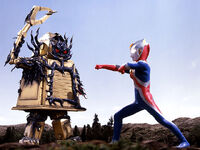 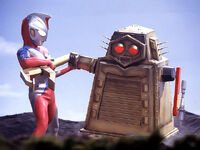 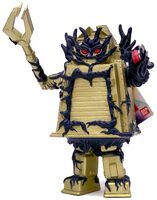 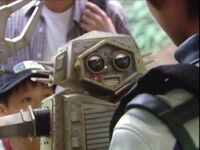 Clevergon in Ultraman Cosmos
Community content is available under CC-BY-SA unless otherwise noted.