Ultraman Taiga episode 6 "The Flying Saucer Is Not Coming"
The Cicada Humans (セミ人間 Semi Ningen) are a race of insectoid aliens and the very first seijin to appear in the Ultraman Series.

The Cicada Man disguised himself as a human in order to steal the Tilsonite meteor, needing it to control two arriving Garamons. Hiding out within the forests of Japan, the alien being ordered the pair of giants to rip Tokyo apart, but he didn’t expect humanity to track him down. Upon arriving, the soldiers’ weapons levitated out of their hands and fired on them, ending their lives.

The technology of the Cicada Man was great, but Jun managed to knock the device out of the alien’s hands. As his plans began to fall apart, the being was shot, forcing him to give up his human disguise and reveal his true appearance. Having lost the meteor and the pair of Garamons, the creature stumbled to the alien ship emerging from the lake. His own kind would not forgive his failure and executed the fiend in a beam of light, igniting the creature in a blistering inferno. Garamon Strikes Back

Like in the original Ultra Q, the Cicada Woman (セミ女 Semi Onna) had a Cicada humanoid appearance, only it was female.

The Cicada Woman's plan was to destroy the Earth with small robots called Gara Qs to sell to Earth as toys, an advanced Garamon android, Garagon! However, Garagon was destroyed and the Gara Q's decided they like the humans and stayed. But later, in retaliation for the defeat of Garagon and her last planned invasion, the Cicada Woman captures Professor Watari, and Garagon II. However, Cicada Woman is defeated when she was betrayed by Ryo’s Gara Q.

Here, she was one of Dada's crime network tasked with kidnapping female humans on Earth for cloning, believing that humanity is on the verge of extinction with Dark Thunder Energy. The Cicada Woman worked by tricking young women into working at her agency, where Dada could shrink them for capture.

In one of Xio's operations to bust the kidnapping syndicate, they went to the group's hideout via access gained through Kemur's interrogation. Asuna disguised herself as their client and the rest of the Xio members quickly stormed into the office, capturing the culprits before finding for a cure to reverse Dada's shrinking effect. Feature Report! 24 Hours Inside Xio

A Cicada Woman was one of Murnau's agents sent to steal the X Devizer from the SSP, alongside an Alien Ckalutch, a Hupnath and a Galmess, so that Ultraman X could be turned into a jeweled statue like Ginga and Victory. Their plans were stopped when Gai Kurenai arrived and fought the group in a fist fight.

Later the group of four aliens were present inside Murnau's mansion where they engaged in combat with: SSP, Juggler, Daichi, and Gai. They group were once again defeated by the combined efforts of Gai and Daichi. Ultraman Orb The Movie: Let Me Borrow the Power of Bonds!

A Cicada Woman worked with the AIB, where she confirmed to Zenna that no one called him at headquarters, not knowing that an Alien Godola was about to attack her superior.

A Cicada Human appeared alongside Alien Ckalutch, both are members of Villain Guild who tried to attack an EGIS vehicle and the two workers escorting Alien Rivers Kawazu and a baby Zandrias. Despite the two of them catching up to the car with ease, Hiroyuki slammed on the brakes, resulting in the two aliens accidentally shooting each other with their blasters, revealing their true forms in the process. Buddy Go!

A Cicada Girl (セミ少女 Semi Shōjo), whose parents were murdered, was once encountered by Kana Sasaki before the founding of EGIS. The alien girl wanted to go back to the stars with her parents. Kana wanted to save her, but she was unable to do so as her partners lied to the girl and instead brought her to a research facility. The Flying Saucer Is Not Coming 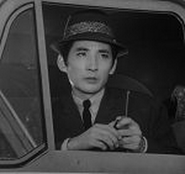 In this manga, the Cicada are the ones responsible for altering the Plasma Sun, the end result of their actions is their transformation into the recognizable Alien Baltans, the people of the Land of Light's transformation into Ultras and the creation of numerous monsters. As the Baltans they went on to be the main antagonist of the manga until their defeat at the hands of Ultraman. They were then followed by the Universal Alliance, a group composed of different evil aliens who operated on their orders. The Baltans were also the reason Earth was home to so many monsters. The Baltans were conducting horrific experiments on the various monsters from across the universe, as part of the experiments to weaponize them they sent a probe filled various tadpole like creatures to Earth. The tadpoles had the DNA of the numerous monsters they had captured and experimented on and would grow to be the various monsters that were seemingly 'native' to Earth that the Ultras fought over the years.

In the 2011 manga, a villain called Alien Adacic was the result of cross breeding between the Cicada Humans and the people of Planet Baltan.

The Cicada People appear in the Redman comic series as seemingly the main antagonistic force. For years since 1976, they've been filming Redman's endless crusade against monsters and aliens through various cameras and such. Their reason for doing so is unknown, could be for research or entertainment, but it is not truly known. Said footage was accidentally broadcast to Earth, letting humanity see Redman's monster slaughter when they weren't meant. It is later hinted that Redman and the monsters now know they're being recorded.

Both a Cicada Man and a Cicada Woman are seen as part of the class Riku Asakura and Pega took, alongside an Alien Groza, an Alien Serpent, and an Alien Mefilas.

A model of the Cicada Human 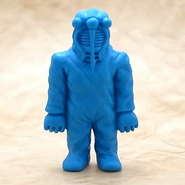 The Cicada Woman emerging from her cocoon 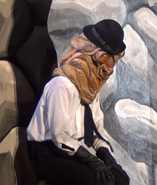 A Cicada Man in a Stage Show