Chronorm's name could come from the Greek word for time, Chronos (Χρόνος Chrónos) given its power to warp time.

Chronorm was an alien monster that fed on time through the memories of people and aliens. As a result of its actions, Chronorm had destroyed the home planet of Alien Angel and soon found its way to Earth to feed as well. During its stay on Earth, Chronorm targeted the memories of Marina of GUYS and proceeded to travel back to the year 1999 to feed. Alien Angel, Marina, and Mirai however found themselves trapped in Chronorm's time rift and so Chronorm attacked them to prevent them from interrupting his meal. As Alien Angel and Marina tried to protect a younger Marina from the past, Mirai transformed into Ultraman Mebius to hold off the alien slug. At first, Chronorm had the advantage by beating down the Ultra with its whips and teleportation mist ability, but once the monster killed Alien Angel (it was trying to attack Marina) Marina fought back by shooting out Chronorm's eyes with her weapon. Mebius quickly took the opportunity to finish off the monster by firing the Mebium Shoot at it, destroying Chronorm and avenging Alien Angel's sacrifice. 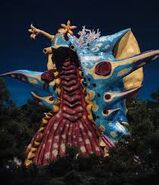 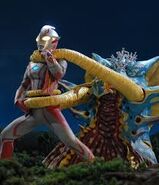 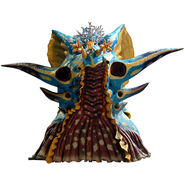