Chiburoids are Alien Chibull's enforcers that were built to serve him. Lead by Android One Zero, they were tasked to go into the Victorian civilizations to steal the Victorium Crystal. Some of them served as Exceller's guards and several assisted One Zero. Whenever she needed their help, she would threw or open a ball canister that turned into multiple Chiburoids.

In episode 3, the Chiburoids arrive on Earth in Lived Inpelaizers, using Chibull Sparks. All of them managed to overpower Ultraman Ginga alone. When Victory transformed, he used Eleking Tail to eliminate the Chiburoids/Inpelaizers. As the army about to be defeated, Alien Guts Vorst Monslived into King Joe Custom and gained the upper hand on Victory until Ultraman Ginga arrived and transform into Ginga Strium to eliminate remaining Inpelaizers with Ultraman Taro's Strium Ray and Ultraman's Spacium Ray and defeated Vorst/King Joe with Ultraseven's Wide Shot.

Near the first half's final, Chiburoids were summoned again by One Zero to raid the UPG Live Base. All of them eventually destroyed by UPG members.

With One Zero abandoned by Exceller, the Chiburoids' leadership were shifted to Bolst and finally Alien Zetton Berume. Berume and remaining Chiburoid armies banded with the former top three minions of Dark Lugiel, Alien Valky, Alien Icarus, and Alien Nackle Gray as Dark Lugiel Rangers (ダークルギエル特戦隊 Dāku Rugieru toku sentai) to attack Victorians and human survivors until they were defeated. With all evil forces on Earth defeated, all known active Chiburoids were destroyed. If any others existed, they would inactive on Exceller's abandoned ship.

A Chiburoid was seen fighting against other aliens in one of Volk's flashbacks. Requiem of the Wolves

Two other Chiburoids appeared in the Kaiju laboratory that the Villain Guild ran. They captured Hiroyuki Kudo and a boy named Kanta, who snuck into their lab to rescue his pet Moko. The Chiburoids were dealt with when Homare Soya appeared. I Can't Hear Your Voice

Club
Add a photo to this gallery

Android One Zero leading a squad of Chiburoids. 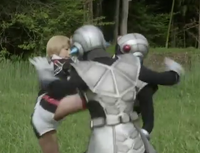 Add a photo to this gallery
Retrieved from "https://ultra.fandom.com/wiki/Chiburoid?oldid=510437"
Community content is available under CC-BY-SA unless otherwise noted.