Unidentified
Charija (チャリジャ, Charija) is an alien that first appeared in episode 49 of Ultraman Tiga.

An alien who owned a monster named Yanakargie, after Yanakargie was sealed away by a being of light from M78, he came to Earth to looking for a monster to buy in the year 1993. But there was nobody around who sold monsters on Earth. The alien got the idea to go see Eiji Tsuburaya and quickly went to the year 1965 with his time machine. After he arrived in the year 1965, He looked for the Tsuburaya Productions Manager, hoping to buy a monster. After some talking, Daigo came on to the scene having followed the suspicious man and met the alien. Daigo shot the alien but missed. Laughing loudly, it disappeared. Back in 2008, he reported the situation to the GUTS captain Iruma. In the same night, Daigo talked with a man who had got a stone called the Ultra Star. He said the Ultra Star could summon Ultraman and told the story of how he acquired it. Overhearing this, the alien went to the lake where his monster was sealed and unleashed him. The monster called Yanakargie appeared from a blue light and began to destroy the area. Daigo quickly transformed into Ultraman Tiga, but the monster easily trounced him and began to siphon off his energy. Watching, Eiji summoned Ultraman, to the alien's nostalgic surprise, who then freed Tiga from the monster's grasp and recharged him. Both Ultramen turned to the monster and used their respective beam attacks, Tiga used his Zeperion Beam, while Ultraman used his Spacium Beam. Both beams struck the monster together destroying it. Giving a disappointed sigh at his monster's death, Charija swore to Ultraman that he would return and disappeared in a puff of smoke.

Having survived his previous encounter with Tiga, Charija would jump into several multiverse through a space-time wormhole to kidnap monsters as part of selling them. The monsters he captured are Galra from a world of flying pterodactyls, Neo Geomos from Neo Frontier Space World, Psycho Mezard from Gaia's universe, Chaos Jirak from Cosmos' universe and lastly Nosferu from Nexus' world.

His current goal is to find the Red Sphere, which leads him to Tsutomu's universe and sent down the monsters he caught to attack Ultraman Gaia. Through Tsutomu's wish, the monster army were dealt with by the arrival of Daigo/Tiga, Aasuka/Dyna, GUTS and Super GUTS. After the combined monster Demon Gyrares XIV was defeated as well, Charija was forced to retreat but declares that he will get the Red Sphere one day. Tiga, Dyna, and Ultraman Gaia Novel: The Adventure in Hyperspace 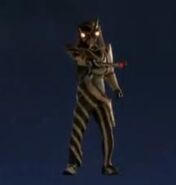