"We are numerous, whether in a single body or several, we act under the same will. There will be a new order."
"I see that. The planets whose ecosystems you have changed, is that all a part of evolution?"
"Correct. The remaining creatures of those planets will build up a new order under the same will. For this, sometimes, there will be sacrifices."
"Is that supposed to be necessary!?"

P87 Spot in the Andromeda Galaxy

Chaos Header (カオスヘッダー Kaosu Heddā) is the head of the Chaos Organism and a former main antagonist of Ultraman Cosmos series. During his conflict with Earth and Ultraman Cosmos, the entity eventually took on physical manifestations to attack the Earth directly. It was eventually redeemed and returned to space.

"Chaos Header" was a term created by Team EYES member Doigaki for identification, but the entity had since adopted it as its own name.

Chaos Header was an artificial being created to bring justice to the galaxy, having emerged in the nearest galaxy to the Milky Way, the Andromeda Galaxy. Exactly who created him is unknown, yet the being carried immense power and desired to follow his directive to the letter. However, due to this obsession with bringing about justice, he believed that violence was the only way to achieve peace and began to force a new order on the universe with an iron fist. Long before Cosmos set foot on Earth, Chaos Header rampaged on an unnamed planet Cosmos was protecting. He changed the planet's ecosystem and turned it into a wasteland. Cosmos, who felt guilty for his perceived failure, vowed to never let another planet fall into Chaos Header's grasp.

The planet which became Chaos Header's next target was Juran. As Chaos Header rampaged on the planet, Parastan, the unknown protector of the planet fought and defeated him forcing him to retreat. This was witnessed by the planet's ancient civilians, who wrote the story down on a wall.

Chaos Header first appeared as chaos organisms over a city. Its appearance awed the citizens. Suddenly, the energy reaction of Chaos Organisms spiked and it fired a ray down on the city, destroying it. He later approached Kaburaya Island and infected Lidorias. Once the chaos organism overtook her body, Chaos Lidorias went on a rampage attacking Japan, blindly under the virus' influence. Despite the brief success of Musashi in calming down the infected monster, Chaos Lidorias rampaged again when the JADF arrived to kill her. After having his plane shot down, Musashi merged with Ultraman Cosmos for the first time and stopped Chaos Lidorias's rampage by purifying her, expelling the chaos organisms from within Lidoras, freeing her.

"Shinobu, is that transformed from a human?"
"No, Mr. Kano is here. That's neither a transformation nor a clone. That is probably a materialized form of Chaos Header."
"Materialized Chaos Header?"

After an incident with using Akane's hatred to manifest a monster, Chaos Header gain interest in human emotions and started a series of kidnapping incidents. Through the emotion of hatred and possessing a human host named Ryoichi Kano, Chaos Header started to manifest its own independent form Iblis, which almost scored a victory against Ultraman Cosmos' Corona Mode until Kano's compassion to his son, Shota, weakened the form for Cosmos to finish. As time passed, the virus developed it's own immunity to any of Cosmos' form of exorcism. After the death of Eligal, Chaos Header masqueraded as an infected version of the monster to trick Cosmos into wasting his energy and eventually unveiling itself as Chaos Header Mebut. Chaos Header would went on to a rampaging spree and trying to kill the weakened Cosmos, facing against Team EYES and Lidorias along the way. A partially energized Cosmos continued the fight and was further empowered into Eclipse Mode, using his new abilities to gain the upper hand of the fight and eventually defeating Chaos Header Mebut when the villain's attempt to use Lidorias as a meat shield was rendered moot.

With knowledge of Musashi Haruno as Cosmos' host, Chaos Header traced him all the way to Treasure Base and a semi-possession attempt during Cosmos' transformation resulted with the birth of Chaos Ultraman. After defeating Cosmos and imprisoning Musashi, Chaos Header used their newfound form to possess a Neldorand and fight against Team EYES. Musashi escaped thanks to his teammates freeing him and had Cosmos Eclipse Mode destroying the clone. Several months later, Chaos Header managed to trick the JADF forces into killing Mazalgas to prevent the humans from putting the monster's Chaos Chimera into use. When SRC try to recreate the formula, Chaos Ultraman was reformed to destroy the Scientific Analysis Center. Just as Cosmos was about to defeat the clone again, the Chaos Header energy from the Point P87 upgraded their clone into Chaos Ultraman Calamity, the clone now is capable of tanking all forms of Cosmos' attacks. As SRC successfully recreating the Chaos Chimera enzyme, the clone once again found itself at a disadvantage as both humans and Ultraman (including the help of a single monster) collaborated in their war against the space organism.

Chaos Ultraman Calamity's final battle was at the Moon, which Cosmos specifically choose due to its abundance of Soagg minerals to exploit his weakness again. However, that was when all the essence of Chaos Header (including those of P87 point) merged into Chaos Darkness through their mutual hatred against the Ultraman. It seemingly disappeared from Hiura's Chaos Chimera, but the entity landed on Earth, now being immune to all forms of resistance. With knowledge that the entity is simply misguided, Musashi attempted to achieve mutual understanding on both sides, but his efforts were in vain until he merged with Cosmos, using the Ultra's Luna Final and the accompanying cries of Mogrudon, Bolgils, and Lidorias managed to purify him into Chaos Header 0. Cosmos orders him to leave the Earth but Chaos refuses, unless Cosmos accompanies him. As the Chaos Header flies heavenward, he vanishes into light particles.

In Ultraman Saga, Chaos Header 0 eventually arrived on Planet Juran, acting as the guardian for numerous benevolent monsters. Chaos Header was observed in conversation with a Mienin, who stood on the back of his hand.

Chaosroids T, U, and S as well as Chaos Ultraman reappeared in Ultraman Ginga Theater Special: Ultra Monster ☆ Hero Battle Royale! battling their good templates (save Chaos Ultraman who fought Ginga). Both sides fought each other until the Chaos Ultramen had them exhausted. Just as they were about to admit defeat, Ginga told Ultraman, Ultraseven, Ultraman Taro, and Ultraman Tiga not to give up and so they poured on their signature moves and fired at the imposters. They collided with the enemies' signature moves until Chaos Ultraman and the Chaosroids finally lost the beam volley and vanished a few seconds after being hit scoring a major victory for the Ultras.

Although not appeared, Chaos Jirak was kidnapped by Charija specifically out of interest for the Chaos Header's powers. The element of Chaos Header was also added through Chaos Jirak's cell to create Demon Gyrares XIV. Tiga, Dyna, and Ultraman Gaia Novel: The Adventure in Hyperspace

Chaos Header's physical projections, they are described as Light Virus (光のウィルス Hikari no Uirusu) able to assimilate with monsters. The symptoms of a monster infected with the Chaos Virus are, red eyes, altered body parts with bits of 'junk' and a seeming increase in aggression. All the later forms of Chaos Header have these powers, they can transform into a cloud of these or generate a cluster to infect others.

Chaos Ultraman (カオスウルトラマン Kaosu Urutoraman)/Chaos Ultraman Calamity (カオスウルトラマンカラミティ Kaosu Urutoraman Karamiti) was a dark clone of Ultraman Cosmos that was summoned with the hero after Musashi was infected by Chaos Organisms. This vile warrior of evil was capable of matching the guardian’s moves, able to fight back unlike that of any other agent of Chaos and he outlasted the guardian, surviving as Ultraman Cosmos ran out of energy.

Energy Blasts
Chaos Darkness
First appearing on the Moon after Chaos Ultraman's final defeat, Chaos Darkness (カオスダークネス Kaosu Dākunesu) was the true face and might of the Chaos Organism, comprised of all the Chaos Organism particles that rested in outer parts of the solar system. This form was born of the Chaos Header's hatred for Ultraman Cosmos for his constant interfering in its goals and destroying portions of its being.

Chaos Header 0 (カオスヘッダー0 Kaosu Heddā Zero) appears at the end of Ultraman Cosmos and makes a cameo in Ultraman Saga. It is the intelligence of the Chaos Organisms purified after they had taken on the form of Chaos Darkness.

The Chaosroids (カオスロイド Kaosuroido) were created by Alien Mefilas using Chaos Header in Ultraman Fighting Evolution Rebirth episode 12 "The M78 Complete Destruction Plan". As copies of three Ultra Brothers (Ultraman, Ultraseven, and Ultraman Taro) and they were sent to lay waste on the Land of Light so Mefilas could conquer it.

In the series, monsters affected by Chaos Header are either mutated or cloned into corrupted versions of themselves, known as Chaos Monsters (カオス怪獣 Kaosu Kaijū). The symptoms of a monster infected with the Chaos Virus are most of the time, red eyes, altered body parts with bits of 'junk' and a seeming increase in aggression. All the later forms of Chaos Header have these powers, they can transform into a cloud of these or generate a cluster to infect others. 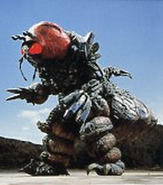 Chaos Bug (infected from a junkyard) 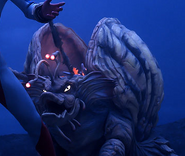 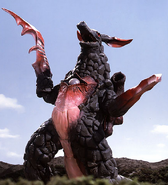 Robo Baltan (infected through a piece of Chaos Bug)

Chaos Header appeared in this game where he has been revived and allies himself with Alien Mefilas in order for the creation of Chaosroids.

Chaos Darkness also appeared as playable character in Ultraman Fighting Evolution Rebirth video game. He appeared in episode 13 and can be unlocked and is playable. His first form called "Neo Chaos Darkness" and last his final form is called "Neo Chaos Darkness II" resulted when Mefilas himself fused with him and cannot be unlocked. He only appears as the final boss of the game and died after purified by Ultraman Cosmos via the teamwork effort of Ultraman, Ultraseven, Ultraman Taro, Ultraman Tiga, Ultraman Gaia, and Ultraman Agul. Ultraman Fighting Evolution Rebirth

In this magazine story, Chaos Header was corrupted back into Chaos Darkness by Dark Zagi and sent to the Land of Light as Chaos Ultraman to steal Ultraman Zero's Ultimate Bracelet. While there he transformed into Chaos Ultraman Calamity and took it with little impunity by was purified by Cosmos. Freed of the darkness he revealed that the mastermind of the plot was Dark Zagi.

In episode 37, Chaos Header appeared in a delusion induced by the Spark Dolls Troupe as Chaos Ultraman and split himself up with Chaosroids T and U. Soon enough, Black King, Kemur, and Ragon appeared to challenge them. They were all taken out, and exploded soon after, quickly; Chaosroid T by Kemur's goo, Chaosroid U by Ragon's radioactive ray, and Chaos Ultraman by Black King's Hell Magma.