None
Chaos Bug (カオスバグ Kaosu Bagu) was a Kaiju that appeared in Ultraman Cosmos episode 5 "Revenge of the Fireflies".

One night Chaos Organism encountered a swarm of fireflies and turned them into ravenous killers. The swarm quickly fed on one man's car leaving only the tires. Musashi and Keisuke arrived the next day to the site only to find the chaos mutated fireflies attacking them. They were about to be eaten alive in their car when Musashi shut off the engine, making it invisible to the swarm. Shortly after the two of them went out to track the swarm, Koji and Ayano were sent in one of the fighters to assist them. The swarm took notice of the fighter's heated engine and formed into the monster Chaos Bug after being fired at. As Chaos Bug tore through the the local town, EYES tried to defeat the creature to no avail. Having no other choice, Musashi turned into Ultraman Cosmos to do battle. Even though Cosmos was able to easily out manuver it, Chaos Bug caught the hero by surprise when its Chaos Absorber redirected the Luna Extract with great force. Cosmos quickly went from Luna to Corona Mode and started to beat Chaos Bug mercilessly. After assaulting Chaos Bug, Cosmos used the Naybuster Ray to blow the Kaiju to pieces.

Swarm Form
The original appearence of Chaos Bug, it appeared as it was a swarm of firefly but in truth, they were just components (e.g. screw) that were lightened and sentient. 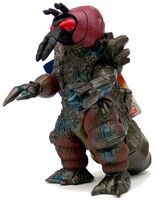 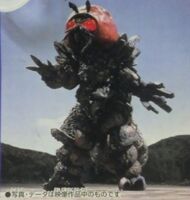 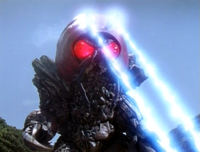 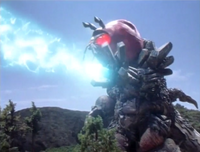 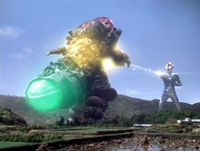 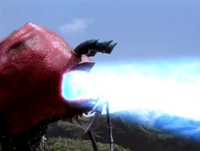