Ultraman: The Ultimate Hero episode 3 "A Quartet of Creatures"
Chandora (チャンドラー Chandorā), also known as Chandlar, is an ancient Kaiju that appeared on an island. The two known specimen were killed by Red King(s).

Although Chandora's origins are uncertain, he was seen in battle against Red King, suggesting that they have a heated rivalry. The battle appears to be a tie as both monster's traits matches the other's in strength (Chandora's wind gusts vs. Red King's massive strength). However after Chandora draws blood by biting Red King's shoulder, Red King tears off Chandora's right wing, causing him to wander away in pain. He was never seen again after this. It's assumed he ultimately experienced one of three fates - Either he bled out and died of his wounds, somehow managed to escape and hide, or was taken down by the SSSP off camera. The Lawless Monster Zone

The descendent of an ancient prehistoric species, Powered Chandora (パワードチャンドラ Pawādo Chandora) was found in South America when researchers found him. However, after much documentation, it seemed as though Chandora was no different than a typical flightless bird other than his size. However, that was about to change when the female Red King appeared from the other side of the hill looking for a fight and found Chandora. For over a minute the battle consisted of only pushing until the female Red King used her tail to knock Chandora down only for him to get back up. The battle for the territory of the two giants went on for some time with neither one of them gaining an advantage over the other. By the time WINR arrived in the TMC, the female Red King had clawed Chandora to death and was now hunting the researchers in a nearby cave.

In akin to the original Ultraman, the Bandai figure was modified from the Peguila figure. 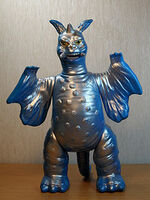 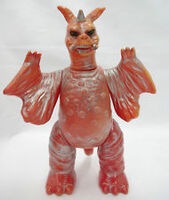 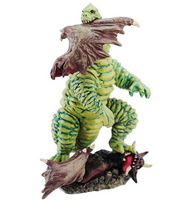 Chandora as he appears in another stage show along with Ultraman Geed.

Behind the scenes
Community content is available under CC-BY-SA unless otherwise noted.