Chameleking was the next choju to appear on Earth following the defeat of Velokron, as a giant egg in a construction site,planted there by Yapool. A man examined the egg, only for it to suck him into it and burrow underground before TAC could investigate. Later, their radar picked up a UFO, which was Chameleking's egg which has grown in size and was somehow capable of flight. Although shots were fired, the egg was unharmed. Later that night, the egg destroyed a jumbo jet, alerting TAC. TAC deployed to find a way to stop it but their attacks did nothing to defeat it. The egg landed on top of a skyscraper and Hokuto kept firing on it but he stopped due to the possibility of the surrounding people being harmed. Meanwhile, Yapool decided to summon a second egg as the other somehow attracted it. The two eggs merged and became a giant super egg. After a TAC meeting, they found out that egg suposedly sunk Atlantis and Ancient Egypt wrote of the creature and its egg. They tried to destroy the egg, only for Chameleking to hatch.

TAC was quick to assault the terrible monster, but their weapons did little to deter the behemoth from attacking the surrounding buildings. It unleashed hurricane force winds on the city, blowing cars and buildings away. TAC knew they had to attack the monster head-on. The captain decided to attack the monster but the missiles got jammed. Fortunately, Hokuto and Minami turned into Ultraman Ace. The monster retaliated with such force, that it is a better melee monster than Verokron. Ultimately, Ace rips off its wings and kills it with the Metallium Ray.

Egg
Before it hatches, Chameleking takes form of a giant egg.

A Marmit Chameleking
Add a photo to this gallery 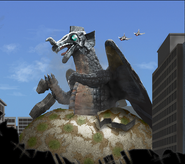 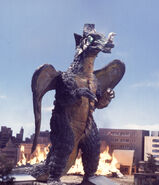 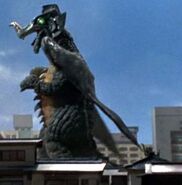 Chameleking vs. Ultraman Ace
Add a photo to this gallery
Retrieved from "https://ultra.fandom.com/wiki/Chameleking?oldid=423406"
Community content is available under CC-BY-SA unless otherwise noted.