Chamelegon (カメレゴン Kameregon) is a kaiju used by the Invaders to attack the Earth and fight Mirrorman.

Chamelegon appeared in episode 34 of Mirror Fight. Stock footage of his fight in Mirrorman was reused in this series. 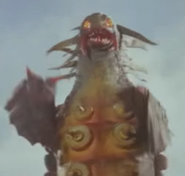 Add a photo to this gallery
Retrieved from "https://ultra.fandom.com/wiki/Chamelegon?oldid=444893"
Community content is available under CC-BY-SA unless otherwise noted.