"My boys, in order to make your dreams a reality, you mustn't fear change!! You mustn't run away from who you really are! The time has come for me to declare this!...I am, Ultraman!!"

―Cereza as Makoto before transforming to Ultraman Orb Dark

"Ultraman
A lover of peace, a fighter of evil
The only one who can protect this Earth
Hearing the people's prayers in despair
Searching for them
Standing up even after losing
A perfect, indispensable hero."

―Makoto/Cereza describing what an Ultraman is

Ultraman R/B episode 16 "This Moment Is A Bond"

Unknown
Cereza (チェレーザ Cherēza) is one of the main antagonists of Ultraman R/B. He is an alien entity who possessed Makoto Aizen as a vessel during the series until episode 16.

Cunning and persistent, Cereza shows determination to obtain his lifelong goal to become an Ultraman, going as far as to wait for 15 years for his plan to come into fruition and would not let Mio's theft of their research as a liability. His public appearance as Makoto is portrayed as a man with huge charisma and faith in both the Aizen Tech and citizens of Ayaka City. He occasionally write proverbs on a piece of paper and hates being interrupted in the middle of his speech. Despite his calm demeanor, "Makoto" is prone to losing his temper during unexpected events, something which carried over to his transformation as Orb Dark.

He insists that people call Orb Dark by its full name and really doesn't like it when people mispronounce it or say the name is too long, suggesting narcissism, which is shown to a greater extent when transformed into Orb Dark.

His fanaticism of being an Ultraman extends towards his irritation against the Minato brothers who became Rosso and Blu, calling out on their inexperience, crude fighting skills and the tendency to bring up daily problems in their duel. Of course, the brothers were right to call out on his hypocrisy when he outright abused the power of Ultraman by arranging accidents he could interfere just to build up his own reputation, especially taking account as to how most of the monster attacks in the city were his deeds to begin with. Over the series' course, Cereza references Gai Kurenai and other past Ultras, including:

"Orb-san, you're cool! When I grow up, I want to be an Ultraman like you!"

Cereza was an alien from the far reaches of the universe, who was inspired by the heroics of Ultraman Orb after he saved the boy from a monster attack. Ever since that day, the boy swore to become an Ultraman to follow his footsteps.

His desire eventually guided him to the planet Earth, which was the landing spot of the Ayaka Star and sought to obtain its power. He wandered around and possessed a worker named Makoto Aizen for use as a vessel, allowing him to blend in with society. Cereza then spent time working at Aizen Tech to further his goal, using Mio Minato's research to study the Gyros, as he believed that they were the key to his ultimate goal. He planned to cross over to other worlds once he obtained the power of Orb, and built a Large Hadron Collider that can open a hole in space and time. Mio eventually came to know about Saki's plan to destroy the Earth along with Reugosite, and stole the Gyros before disappearing for many years. Distraught by her "betrayal", Makoto persisted with his dream and continues his deeds, eventually gaining his own Gyro and a set of R/B Crystals themed after Ultra Kaiju.

As Makoto Aizen, Cereza orchestrated monster attacks and watching Ultraman Rosso and Blu battle against them through the Minato brothers. Although having an Orb Origin Crystal, he also planned to acquire more by targeting Tiga Crystal through Gue-Basser but failed when it became his own undoing.

By gathering various people with "specific" attributes, he used their life force to purify the Orb Origin Crystal and therefore acquired the Orb Ring NEO. This allows him to become Ultraman Orb Dark and made his presence known to the brothers, brutally defeating them while at the same time calling out on their inexperience of an actual combat. While abusing the power of Orb Dark to gain reputation by arranging accidents he could interfere, Cereza briefly lost possession of Orb Ring NEO to the brothers after they challenged him in a rematch, though he managed to reobtain it after the brothers lose to Horoboros, who Cereza defeats via Orb Dark. Summoning a Bezelb for him to destroy, to impress the public, Cereza used the power of Orb Dark once more but was intercepted by Rosso and Blu. Horoboros suddenly reappeared and easily defeated Orb Dark. Cereza/Makoto, in bandages, meets Saki Mitsurugi for the first time. To take revenge on the brothers, he borrows Saki's Gyro after his own malfunctions and uses it to transform into Grigio King.

"I'm feeling purer and purer! Is this really the end?! My AZ plan is all in vain!"

However, even after defeating the brothers the first time, he was defeated by Ultraman Ruebe. Returning back to Aizen Tech, Saki unleashed an energy wave to expel Cereza from Makoto's body and via D.R.L.N., commanded the building to use its ventilation system to trap Cereza within the premises, getting rid of him at least for the time being. With Aizen free from Cereza's control, the human resolved to go on a cycling trip around the world, and left Ayaka City to go on his journey.

Exactly what happened to Cereza following his banishment from Aizen's body is unknown, and he effectively disappeared from the series' storyline, with Saki replacing his role as antagonist for the second half of the show's plot.

This may not be the article you are looking for. For the list of tools used at the time of possessing Makoto Aizen, see Makoto Aizen#Powers and Weapons.

Endurance
Add a photo to this gallery

With Makoto Aizen as a medium, Cereza uses the Gyro and his set of R/B Crystals to transform. 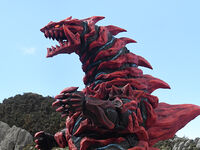 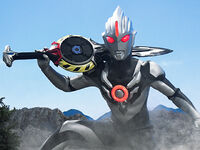 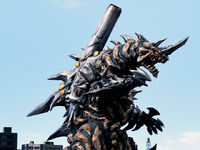 Grigio King
Add a photo to this gallery

Retrieved from "https://ultra.fandom.com/wiki/Cereza?oldid=514575"
Community content is available under CC-BY-SA unless otherwise noted.