Celebro's name is based on "Cerebro", the Spanish/Portuguese for "brain".

Celebro's reason of participating with the Z Riser and the Kaiju Medals he created is for treating everything as a game, regardless if its enjoyable or not to his own viewpoint. He has a habit of phrasing the Space Language Kiete karekareta[1] (キエテ・カレカレータ Kiete Karekarēta lit. "I'm feeling good") As seen later on in the series, Celebro also finds enjoyment in the chaos he made out of the pettiest reasons; one particular instance being unleashing Bullton to the STORAGE headquarters as he was incapable of fathoming the idea of someone else having a blast. It is also demonstrated that Celebro is possessive of his Kaiju Medals, especially the Belial Medal, and losing it to Haruki drove the alien to a sanity slippage.

A highly intelligent, yet frail parasitic alien life form, Celebro decided to take advantage of the chaos resulted by the Devil Splinter and uses them to destroy planets.[3] The atrocities he made in terrorizing civilizations earn him a notoriety in the outer space, as his name is also heard of by Jugglus Juggler. Four-Dimensional Capriccio

Celebro possessed Genegarg[4] to steal a Z Riser from the Land of Light[5] and was pursued to Earth from being chased by Ultraman Z and Ultraman Zero. Upon Genegarg's destruction, he took possession of a Monster Research Center member Shinya Kaburagi as his host.[5]

Using Kaburagi as a corporeal form, Celebro would create multiple Kaiju Medals and enjoying the chaos brought by monster attacks. On certain occasions, he transform into monsters to test their powers or fight the Ultra Warriors on a basis. Unfortunately as Celebro did very little to hide his involvements, this caused the GAFJ to issue an arrest warrant for his illegal activities. At some point after Metsuboros' death, Kaburagi's body took a huge toll as a result from multiple injuries he sustained beforehand. With the silent help of Juggler, he possessed Captain Asano of GAFJ's Police Department and pin Kaburagi as the scapegoat to all of its atrocities.

Possession
Add a photo to this gallery 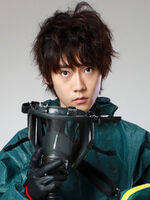 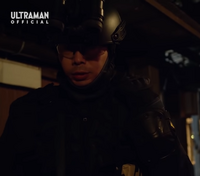 Takeshi Asano
Add a photo to this gallery

Retrieved from "https://ultra.fandom.com/wiki/Celebro?oldid=514194"
Community content is available under CC-BY-SA unless otherwise noted.