This may not be the article you are looking for. For the Giant of Darkness in Ultraman Tiga: The Final Odyssey, see Camearra.

"She is cold and cruel. A female warrior who serves as the Giants of Darkness' leader."

As with the other two Giant of Darknesses, Carmeara is based on the three giants in Ultraman Tiga: The Final Odyssey, with her counterpart being Camearra. Director Koichi Sakamoto admits to be very peculiar with Carmeara, since his wife, Motoko Nagino, used to portray the giant's source inspiration from the aforementioned movie.[4]

Naming wise, Carmeara's name in Roman letters is a rearrangement of the letter "r" from her source inspiration, with their Katakana being one kana away from each others Camearra (カミーラ, Camearra) to Carmeara (カルミラ, Carmeara). To a lesser extent, this also makes her name revolving around Cthylla from the Cthulhu Mythos.

Carmeara is a vengeful individual who shows great anger and hatred towards her opponents, though not as much as Hudram. She used to love Trigger Dark until he defected to the side of light and from then on she started to hate him. Out of the three Giants of Darkness, Carmeara is the most driven to fight against her enemies - Trigger and Yuzare - as well as finding the Eternity Core.

30 million years later in the present day, Carmeara reawakened when she was hit by a floating asteroid, unsealing her. She then went to Mars and commanded Golba to attack the settlement and the Ultra-Ancient ruins discovered there. Carmeara entered the ruins, wanting to have her revenge against Trigger, attacking Kengo Manaka in the process. He transformed into light and became one with Trigger, defeating Golba and making Carmeara retreat. Connection of Light

Soon after, Carmeara located Darrgon's statue and awakened him with her Carmeara Whip, informing him of Trigger's return. Leap to the Future She and Darrgon then went to pick up Hudram after his fight with Trigger, having to restrain him in the process. With the three Giants of Darkness reunited, they continued their quest to find the Eternity Core. The Ultra-Ancient Light and Darkness

After repeated monster attacks, Carmeara decided to attack Trigger directly, managing to perform her Curse of Darkness on him that turned him back into Trigger Dark. The Encounter of Light and Darkness However, after his ordeal in the past, Kengo returned to the future, causing the Giants of Darkness to somehow remember that he was the one who turned Trigger to the light in the first place. The Giants of Darkness attack Kengo, now transformed into Ultraman Trigger, and had the upper hand until Yuzare's spirit emerged from within Yuna and granted Trigger a fragment of the Eternity Core, allowing him to transform into Glitter Trigger Eternity. He forced the Giants of Darkness to retreat after firing his Glitter Zeperion Beam at them, and then finished off Trigger Dark. After this incident, she started to develop a grudge against Kengo and aw the new Trigger Dark as a mere impostor. The 30-Million-Year Miracle

When the Absolutians Absolute Diavolo and Absolute Tartarus arrived on this dimension's Earth seeking the Eternity Core, they harassed the Giants of Darkness and forced them to stand down or be eliminated. Assessing that they cannot defeat the Absolutians, the Giants of Darkness reluctantly give in to them. The Golden Threat However, Carmeara would not stand for this, and assumed a human form to perform some of her own investigations. Discovering GUTS-Select's plan to absorb Diavolo's energy to empower the Nursedessei's battle mode, she and the other Giants of Darkness decide to help them against their common enemy by restraining Diavolo during the energy absorption process, before disappearing. Operation Dragon She then attempted to attack Trigger and Trigger Dark during Metsu-Orochi's rampage, defeating the dark Ultraman while getting hurt in the process. Darrgon then came and stopped her before she could fight Trigger, advising her to retreat as Trigger had human allies on his side that were not to be underestimated. Raging Feast 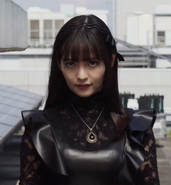 Ultra Monster Series "Captivating Warrior Carmeara" is a 15-cm soft vinyl figure with 3 points of articulation on the waist and arms. Molded in silver-ish gray PVC plastic, Carmeara features primarily gold and some black, orange (eyes) and metallic blue (color timer) paint operations. Her pair of scarfs are molded onto the arms.

Released as part of the Ultra Heroes EXPO 2021 exclusive Chibi Nuigurumi 3-pack along with Darrgon and Hudram, this Carmeara is a super-deformed plush toy.