Capsule Kaiju (カプセル怪獣 Kapuseru Kaijū) are monsters, aliens or Ultras that exist in a capsule most of the time, only to materialize when used by someone. They can understand commands of the user. They first appeared in Ultraseven and was used frequently by Dan to fight Kaiju when he could not transform into Ultraseven. There were five capsules shown, but only three were shown materialized as kaiju. One of those Kaiju that did not materialize was used by Dan in Alien Icarus in his dimension, but it did not work and was lost there. The remaining unused capsule was demonstrated to have healing properties in Heisei Ultraseven.

Another kind of Capsule Kaiju are the Maquette Monsters (マケット怪獣 Maketto Kaiju) that are artificial monsters from Ultraman Mebius. They can only battle for one minute. 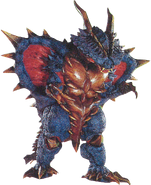