Ultraman Gaia episode 21 "The Sea of a Mysterious Light"

None
Candea (カンデア Kandea) was a Kaiju that appeared in the series Ultraman Gaia in episode 21 "The Sea of a Mysterious Light".

One night, strange bacteria appeared in the oceans of the world. Siren 7500 was sent into investigate and what they find was a bacteria monster, Candea. He started blasting them and they landed in soft sand and almost sank. Then Ultraman Gaia came in time to save them and fight the monster. Candea had the upper hand and launched poisonous gases and energy balls at him and at one point made him sink into sand and pushed him in it. But Gaia then launched the Quantum Flash, repulsing Candea as he came out and attacked Candea once more. Gaia wanted to fire the Quantum Stream, but hesistated as he remembered Fujimiya's words from earlier. This allowed Candea to take the opportunity to attack Gaia. Wanting to end the fight used the Photon Edge and destroyed the bacteria monster and the water reverted back to normal. 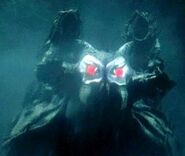 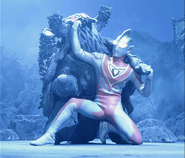 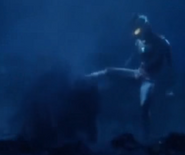 Candea being hit by the Photon Edge