Motoko Nagino
Camearra[1][2][3] (カミーラ Kamīra) was the leader of the three Dark Giants and was the main antagonist of the 2000 film, Ultraman Tiga: The Final Odyssey. Ultraman Tiga was one of her comrades, as well as her former lover, before he chose the light, with his Multi Type and Glitter forms being given to him by her powers. She has a power of darkness stronger than the other two dark giants, but it is weaker than Ultraman Tiga's dark power.

The giantess that in eons past drove a wedge between the ranks of the Ultramen and Tiga Dark’s former lover, Camearra was a powerful and evil being. But the Dark Giants were defeated and Camearra's love was spurned when Tiga turned his back on his former allies, allowing the trio of evil to be sealed away on an island for eons. R'lyeh Island, as it came to be known, was eventually brought to humanity's attention when Camearra's former lover, now reincarnated as the human Daigo, waged his final battle with Gatanothor took place at its shores 30 million years later.

As the humans investigated its ruins, Commander Iruma detected the evil dwelling within, but the soldiers still broke open the age-old tomb. Iruma tried to stop the TPC members from reaching them but it was in vain and Camearra, Hudra, and Darramb awakened once more. As her subordinates ravaged the human intruders, they launched a group of Shibito-Zoigers and try to leave the island but was stopped by Yuzare, who emerged from Iruma's comatose body.

Unable to move from the island physically, Camearra reached out and contacted Daigo through his dreams. Alongside her comrades, she tormented Tiga's reincarnation Daigo and forced him to cooperate by giving him the Black Sparklence. As Iruma tried to escape the island, Camearra stalked her through the tunnels, then blasted her with an energy bolt, revealing her sadistic want to not kill her now but allow her to suffer and blasted her again.

With Yuzare's barrier can last only for 100 years, Daigo soon headed out aboard the GUTS Wing to confront them, the rest of GUTS not far behind him. Arriving on R'lyeh, Daigo transforms into Tiga Dark and therefore cancelling the containment barrier for Zoigers to be freed. However, while he used the Black Sparklence, Yuzare’s words once again bid him to use the power of Tiga for good instead of evil, but in the process, breaking the barrier and allowing darkness to spread over the world once again. Camearra tried one last time to regain her love, but he refused and she sent her followers to execute him while sending the Zoigers to attack the GUTS team in Artdessei.

After watching her allies died and for Tiga to rob their powers again into his light, Camearra finally met the hero once more, on the spot they fell in love centuries ago. However, the evil Ultra assaulted the hero with her whip, commenting on how Tiga had betrayed them all those centuries ago as he did now but as she moved in for the final strike, Rena appeared in a GUTS Wing to aid Daigo/Tiga. Enraged of Tiga not saving his actual lover, but such actions completing his transaction to light, Camearra absorbed Gatanothor's darkness into her monstrous form Demonzoa.

Upon the end of the battle, Tiga had vanquished her monstrous form and saved the Earth. With the island collapsing into the sea, Daigo came upon a defeated and dying Camearra, who professed her desire for the light. In her last moments Daigo held her hand showing her the comfort that reminded her of a better time. The circlet on her head broke, signifying the hold the darkness had over was gone as she died peacefully next to her beloved.

In a similar way to the Black Sparklence, Camearra presses the button of her Sparklence, summoning lightning bolts that unveiled her true form.

Camearra's Transformation
Add a photo to this gallery

Demonic Change
Add a photo to this gallery

Aizord
Add a photo to this gallery

Similar to all Dark Giants, she can also create her own human form while using her own name on it.

Flight
Add a photo to this gallery
Demonzoa
Demonzoa (デモンゾーア Demonzoa), also written as Demonzour and Demonothor, is the unification of Camearra and the dark energy of R'lyeh, made from Gatanothor's hatred of Ultraman Tiga. It is a being that has its body completely covered in darkness, with Camearra mounted on its head. 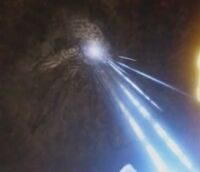 Jab Rush
Add a photo to this gallery

During the special, Camearra appeared with the other Dark Giants as members of the crowd cheering the dancers. During the Couples themed dance segment/Song, she was in front of the stage dancing with Tiga. She was later back in the crowd, standing just below Tiga.

Camearra appears as a character encountered in Mega Monster Battle: RR. On most levels, Camearra will appear alongside Gatanothor. Camearra's strongest attack consists of her whipping the opponents or transforming into Demonzoa and firing the Demon Jabber. She is a playable character if the player has the Camearra card to access her character.

Camearra appeared in the crossover game Super Hero Generation as an enemy Commander. She will appear early on in the game with Darramb, Hudra, and a group of Shibito-Zoigers. In this universe, the Ultramen, Kaiju and Seijin can assume the size of normal humans. This universe is a crossover including Mobile Suit Gundam and Kamen Rider characters.

Retrieved from "https://ultra.fandom.com/wiki/Camearra?oldid=541259"
Community content is available under CC-BY-SA unless otherwise noted.