C.O.V.:
C.O.V. II: TBA
Baby C.O.V.: TBA
Super C.O.V.: TBA
C.O.V. (コッヴ Kovvu) is the first Kaiju in the Ultraman Gaia TV series to appear on Earth. C.O.V.'s race along with Pazuzu's originate from Star (Planet) M91, where the Radical Destruction Bringer harvested them for their invasion of Earth.

Arriving on Earth through a wormhole, C.O.V. burst out of what is to believed to be a meteorite. Panic entered the streets as the monster released several blasts of energy into buildings and destroying them. As X.I.G sent out their fighter jets to take care of the monster, Fighter 2 was brought down by the beast, and a young man, Gamu Takayama, watched as the other Fighters engaged on the beast. Suddenly, time began to slow down and stop, following a hole appearing beneath Gamu and causing him to fall through, revealing the giant, Ultraman Gaia.

Gamu then becomes the host of Gaia, and the two fuse to fight C.O.V. together. After nearly getting defeated by the gigantic terror, Gaia destroyed it with Photon Edge. Seize the Light! A Hero Appears

C.O.V. returned as C.O.V. II (コッヴII Kovvu II) in Ultraman Gaia episode 10, "Rock Fight". This version did not fully mature and thus had a different appearance.

When the Planet Destroyer Machine Varsite (惑星破壊機 ヴァーサイト Wakusei Hakai-ki Vāsaito) emerged from a wormhole, XIG fighters were sortied to intercept it. When it was discovered that the ship was a factory of thousands of C.O.V. eggs, XIG's attacks grew stronger. With the help of Team Crow's rock n' roll music frequency, many of the eggs were destroyed and the ship crash landed in an uninhabited area in Alaska. As the smoke cleared, a white C.O.V. emerged from the ship.

Gamu immediately transformed into Ultraman Gaia. Slashing and striking the silver and red hero, C.O.V. II put up a valiant fight. However, as it had not fully matured, the kaiju's attacks were weaker than a fully-grown C.O.V.. When the surviving eggs began to hatch, Gaia hesitated to destroy them. When he did, the C.O.V. II grabbed him from behind and the baby kaiju opened fire on him. The XIG fighters went in for support, but was distracted by the baby kaiju. The fighters changed their target and destroyed all of the baby kaiju. Gaia quickly gained the upper hand, pummeling C.O.V. II with a series of strong punches and kicks. The hero grabbed the creature and threw it back to the ship wreckage. Gaia unleashed the Quantum Stream and destroyed the C.O.V. completely, along with any of the surviving eggs.

After the ship crashed in a forest, C.O.V. II made itself known as it examined the outside world. Gamu quickly transformed into Ultraman Gaia and fought the kaiju. While the kaiju did land some hits on Gaia, it was too weak to overpower him. The surviving eggs hatched and numerous Baby C.O.V.s appeared. Gaia sought their destruction with a Quantum Stream, only to be grabbed by C.O.V. II. The baby kaiju fired energy blasts on him, but XIG arrived in time and effortlessly wiped them out. Rock Fight

Alchemy Stars used a machine to open a wormhole, in order to gain access to Star M19, believing it to be the source of the Kaiju from the Radical Destruction Bringer, as Alchemy Stars had found signs of both C.O.V. and Pazuzu. However as GUARD used the worm hole machine, the Radical Destruction Bringer intercepted it with one of their own and unleashed two improved versions of two kaiju, Super C.O.V. (超コッヴ/スーパーコッヴ Chō Kovvu/Supa Kovvu) allied with Super Pazuzu. The two absorbed the energy in the wormhole and were powered up when arriving on Earth. Ultraman Gaia, who was already on the scene trying to stop Alchemy Stars, attacked them, but he was over powered. Team Crow was easily taken down by Super Pazuzu's horn lightning while Super C.O.V. blasted away at the Alchemy Stars base. Hiroya Fujimiya became Ultraman Agul and the two heroes fought back. The two super monsters were of no match for the combines might of Earth's guardians and after Gaia became Ultraman Gaia Supreme Version the assaults continued and ended with both heroes using the Photon Stream attacks to destroy the two kaiju. The Attack of the Space Monsters

C.O.V. participated in the Dark Spark War fighting alongside various monsters against the Ultras until he was turned into a Spark Doll by Dark Lugiel. Town of Falling Stars It is unknown where the Spark Doll of C.O.V. has fallen. It is likely that he returned to space in his original form after Ultraman Ginga defeated Dark Lugiel. Your Future

A Spark Doll copy of C.O.V. was used along with Golza, Melba, Reicubas, and Gan-Q by Alien Chibull Exceller to become Five King. Activate! Magnewave Strategy Fight to the Death of the Morning Glow

Sometime in 1908, Super C.O.V. emerged in a fjord and then rampages in Rusalka until Ultraman Orb engaged in a heated battle with it. Although the monster was defeated, Gai was left in a state of amnesia while Jugglus Juggler harvested its card and used it in unison with Kingsaurus II and Pris-Ma to awaken Maga-Zetton. 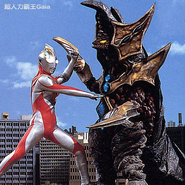 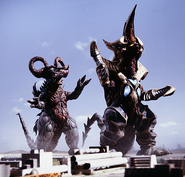 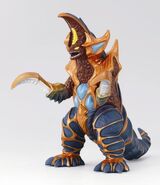