Burnaddon was designed based on the Tower of the Sun.[2]

Burnaddon suddenly appeared near a storage area in Chiba, blowing it up. It then moved elsewhere and climbed up an electrical transmission tower, getting the attention of people and the police. The Kaiju Eugenicists were nearby to witness it, and Onija put the monster under his control, growing it to giant size. News of the Kaiju attack quickly spread, alerting Gauma who called Yomogi Asanaka and Yume Minami to fight it, making them skip a few classes at school.

Burnaddon initially had the upper hand as the three Dynazenon pilots were distrustful of Gauma, since he had been called a traitor by the Kaiju Eugenicists earlier, and were unable to unite into Dynazenon. After putting the pressure on him, Gauma told them the true reason he pilots Dynazneon, and they were able to believe in him again. Dynazenon faced against Burnaddon and brought it to space where it could not produce explosions, and then blew it apart with the Dynazenon Full Burst. Its head still survived and attacked them, but Dynazenon changed into Dynarex and destroyed it with the Rex Fang. Burnaddon's pieces fell back onto the Earth, and one of them crash landed Onija. It did not kill him. What is a Traitor? 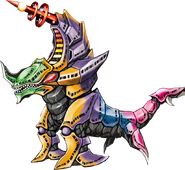