Bullton (ブルトン Buruton)[1] is a meteorite-like creature that can manipulate reality. It debuted in episode 17 of the TV series Ultraman.

Bullton's name comes from the katakana for the French surrealist poet André Breton, who had died a few weeks before the episode's airing. Breton was also part of the Dadaism art movement which helped inspire the design of the Dada aliens.

According to Tohl Narita, he designed Bullton to be a 'moving abstract form' and also based it on a sea anemone.

First arriving as two small meteor fragments, one red and one blue, the fragments possessed reality-altering capabilities and thus were studied further by the Science Patrol scientists for further examination of this new power. After some accidents took place involving its warping abilities with the scientists, the fragments were placed together and locked up avoid any further problems within the Science Patrol's HQ. A mistake that would only worsen the problem.

Now together, the fragments combined and created the giant Bullton creature from within the HQ. Once free, Bullton used its warping powers to meddle with the Science Patrol's affairs, trapping everyone in the 4th dimension, with the exception of Fuji and Hoshino, whom were outside at the moment. Fuji called for backup into the form of Japan's Self Defense Force to battle the creature, but Bullton used its reality warping abilities to swap vehicles from their positions (tanks in the air and jets on the ground.) While the SDF couldn't do anything to harm Bullton, they did manage to lead Bullton away from the Science Patrol's HQ, allowing Hayata to transform into Ultraman to battle with the creature instead.

However, once in combat Bullton used its warping capabilities to confuse and outsmart Ultraman from harming it, eventually trapping the hero underground. Ultraman however fought back and after resurfacing, created his own temporal-spatial rips and tears, which damaged Bullton's antennae, stunning the creature. With the opportunity, Ultraman fired two Spacium Beams at the object, reducing it to a tiny and weaker rock, which was crushed shortly after by Ultraman.

Bullton appeared long ago on Planet Boris as two fragments which were found by human research scientists, who took them back to their lab at Belargo City for further study. The fragments soon combine and take its true form, and uses its time and space bending abilities to summon forth multiple giant monsters from across time and space. Resulting in mass destruction and deaths of many human colonists on the planet, turning it into a barren wasteland.

Sometime afterwards, the ZAP SPACY arrives at this location and disturb Bullton from an underground resting place, who then summoned the monster Froguros in an attempt to rid the intruders. Frogros was quickly destroyed by Litra, forcing Bullton itself to appear and attack them itself. Rei then summons Gomora to battle Bullton, but Bullton retaliated by resurrecting the previously killed Red King, Telesdon, and Neronga to battle Gomora. Despite outnumbering Gomora, Bullton and his monster soldiers were destroyed, thanks to Telesdon's misfire. The Stone Which Calls Monsters

Bullton's Kaiju Card was used by Murnau to send Gai Kurenai to where Sadis was. It was also used on the SSP members and Ittetsu Shibukawa when they trespassed into her mansion-looking spaceship. Ultraman Orb The Movie: Let Me Borrow the Power of Bonds!

Bullton was swallowed by Genegarg while it was being pursued by Ultraman Zero for swallowing several Ultra Medals. After Genegarg threw up a meteorite on Ultraman Z, he threw up Bullton towards Zero. Zero, thinking it was just another meteorite, tried to deflect it, but it instead warped him into its pocket dimension in which the Ultra slowly lost his strength. Chant My Name!The Man Returns! Although Zero escaped using Shining Zero to reverse time, what happened to Bullton after that was unknown. His Majesty's Medal

Bullton later appeared under the ownership of Shinya Kaburagi, who put its two pieces together and used its Four-Dimensional Willpower and Four-Dimensional Phenomena abilities to wreak havoc on the STORAGE HQ. After some time, Bullton was sent to attack a nearby city, and was confronted by King Joe STORAGE Custom. The robot was little match for the rock-like creature, and confounded King Joe's attempts at fighting it. Fortunately, Z arrived on the scene, and began a counterattack, but Bullton trapped him in the ground and rolled over the Ultra's head several times, being stopped only by King Joe's intervention, giving Z enough time to escape and transform into his Beta Smash form. After crippling Bullton's warping powers by ripping out its feelers and impaling it with the Z Lance Arrow, Z hurled Bullton into the air with his Energy Rope, then destroyed it with his M78 Style Shining Tornado Slash, seemingly for good this time. Four-Dimensional Capriccio

After Bullton’s defeat, a rift in space was left behind, allowing Greeza to materialise and attack Earth. After Greeza managed to defeat Z and Geed, Yuka Ohta theorised that beings capable of manipulating the fabric of space and time like Bullton were required for the universe to maintain its integrity. Bullton's defeat had torn the fabric of space, and the resultant rift needed to be repaired to stop Greeza’s attack. A Warrior's Duty

After fleeing from Z's Earth with King Joe STORAGE Custom, Alien Barossa IV combined Bullton's two pieces to halt the pursuing Ultraman Z and Space Sevenger and make off with the now modified robot his race had previously procured. Bullton's effects sent everyone except for Sevenger through a dimensional wormhole to the Earth where Ultraman Trigger was currently active. Inter Universe

Bullton reappeared in episode 1 and 7 of the video game, Ultraman Fighting Evolution Rebirth.

In the video game's story mode, Bullton was the first monster revived by Geronimon and the first monster to be fought by Ultraman in a city. Shortly after being beaten, Ultraman crushes the stone that being Bullton and flies away.

Later on, Bullton is revived by Geronimon again and is fought this time by Ultraman Gaia at an airport. Before Gaia can deal with Bullton, Bullton creates an evil copy of Ultraman Agul to do battle instead. After battling the fake, the real Ultraman Agul arrives to battle the fake. However after Gaia been weakened in battle, Bullton sucks the Ultra into another dimension that resembles the innards of Bullton. Gaia manages to beat Bullton again and destroys it, leaving him and Agul to leave.

Figure of Bullton, by Bear Model 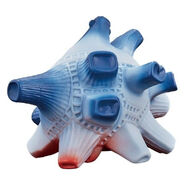 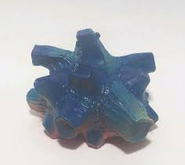