SSSS.DYNAZENON episode 6 "What Is This Pain?"

SSSS.DYNAZENON episode 7 "What's Our Reason for Coming Together?"
Bullbind (ブルバイン Burubain)[1] is a Kaiju that debuted in SSSS.DYNAZENON. It was brought under the control of the Kaiju Eugenicists Onija and Mujina.

Hideo Okamoto designed Bullbind with inspiration from a Buddha statue, with the halo placed in front instead of the back. It was given three irises, based on the concept of a third eye, in a single eye so that it would appear more insane-looking.[2]

Bullbind appeared and was stuck under a bridge, flattening some nearby cars with its gravity powers. Onija attempted to control it but found that he was unable to until Mujina helped him. Bullbind grew to giant size and started to destroy the entire city until Dynazenon appeared and fought it. However, Yume Minami and Koyomi Yamanaka were out of focus due to their respective circumstances, and the combination was thrown off balance. Even after changing to Dynarex, Bullbind still had the upper hand. Just as Dynarex was about to lose, Gridknight suddenly appeared. What Is This Pain? Gridknight was just about to defeat Bullbind, but the Kaiju Eugenicists decided to retreat instead, making Bullbind disappear in a flash of light. They attacked and took over an oil rig-like area and started to charge up Bullbind throughout the night, granting it grater power. Bullbind re-emerged the next morning, facing against Gridknight and the damaged Dynazenon. The 2nd used her Fixer Beam charge to repair Dynazenon's damage, and both Dynazenon and Gridknight destroyed Bullbind shortly after. What's Our Reason for Coming Together? 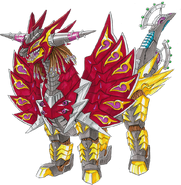