Return of Ultraman episode 41 "The Revenge of Alien Baltan Jr."

None
Builgamo (ビルガモ Birugamo), also spelled Billgamo[1], is a robot that appeared in episode 41 of the TV series Return of Ultraman.

Realizing he was not powerful enough to enact his vengeance alone, Alien Baltan Jr. obtained Builgamo for his invasion of Earth. Upon arriving, he kept himself and Builgamo’s main body hidden within the walls of a building by creating a shadow world. After his trap was set, Baltan Jr. dissolved his Shadow World, causing the building to be destroyed by the activating war machine. The rest of Builgamo’s pieces combined to form the towering robot and Baltan Jr. fully activated the machine, ready to destroy everything in his path, including MAT, who them and Jiro were trapped in the robot after the building collapsed, and attacked the surrounding city with its energy ray. Hideki Go then began attacking the battle machine to distract it but his shots didn’t even phase it as it kept trying to destroy him, prompting him to become Ultraman Jack. But within moments, the robotic nightmare began overpowering him and lighting the surrounding area a blaze. It seemed the wrath of Baltan Jr. would be realized as his massive machine overpowered Jack in every way. However, with the help of the Jiro Baltan Jr. had captured, MAT escaped their prison, having ended up inside part of the robot. With the humans now free of Builgamo, Jack was able to fight back but the robot still proved hard, as nothing in his power seemed to effect it, even reflecting its own ray back at it. But he concentrated his fire on the headlight-like section on the front of its body, finding a weak spot and hammering it, causing the machine to malfunction. Finally, he used the Ultra Bracelet to attack the joints of the robot, slicing it to pieces, Builgamo erupted into flames, crippled, but soon its pilot would emerge to attempt his escape. The Revenge of Alien Baltan Jr. 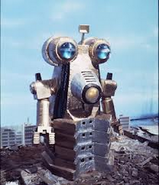 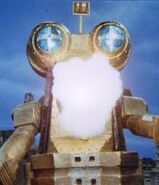 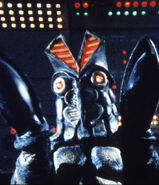 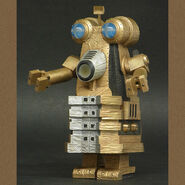