A new type of space beast, Bugbuzan, appeared on Earth and began to feed off of humans that were driving by in their cars. After Jun had nightmares from the creature's dream infestation of a Beesectar swarm he quickly turned into Ultraman Nexus. The two began fighting and while Nexus did have the upper hand Bugbuzan managed to do some damage including making a gash into the hero's right leg. Night Raiders Chesters Alpha, Beta, and Gamma soon arrived on the scene. Chester Alpha began to assault Nexus and Beta and Gamma opened fire on Bugbuzan. Because of the interference from Night Raiders neither giant could land a hard blow on the other. Seeing this as a chance to escape Bugbuzan flew off, but not before Nexus used the Chrome-Storm Ray to heavily damage the monster's back. Bugbuzan later reappeared the next day as it began to eat unfortunate hitch hikers. After night Raiders updated the Chesters into Chrome Chesters to penetrate Nexus's meta field Bugbuzan was found in an abandoned factory and ate three graffiti artists. Night Raiders was soon on the scene and was informed that a six year old girl named Rina might be in the area. Jun was about to turn into Nexus, but was forced to battle the evil Dark Faust. After Kazuki and Nagi found Bugbuzan communications were jammed from the energies of Faust and Nexus. Soon into battle Kazuki found Rina and tried to protect the young girl and her dog, Hayate. The two were soon cornered by Bugbuzan's pincer tail. Nagi arrived just in time and after a couple shots to the tail the group made it out. As Bugbuzan came out to reveal itself the rest of Night Raiders showed up and used ice shots to free him. As the space beast was walking forward half frozen Nagi fired a single shot into it, blowing Bugbuzan to pieces. Chosen One - Dunamist -

Bugbuzun Brood (バグバズンブルード Bagubazun Burūdo) are human-sized drones used by Bugbuzun Growler, these man-sized insectoid monsters prowled the streets, killing any that they came across. After feeding, they’d return back to their giant master and be devoured themselves, giving the blood they ate to Bugbuzun Growler. Their heads modified their beast signals so the Night Raiders couldn’t find them, and within days, over ten people had gone missing.

Their heads modified their beast signals so the Night Raiders couldn’t find them, and within days, over ten people had gone missing. One of the creatures made the mistake of attacking one of the team, however, and soon their tricky disguise as humans was blown. The Night Raiders led a full campaign against them. When Himeya confronted the first Bugbuzun Brood creature, the Unknown Hand suddenly appeared and empowered it. The result was a towering titan, a monster that would have destroyed the entire warehouse if Ren didn’t act fast enough. As it grew larger and larger, the human called on Ultraman and created a Meta Field as he did so. The two were now in a safe area of combat as the Night Raiders dealt with the other smaller beasts. The giant insect, however, was far from a match for Earth’s defender. Coating his fist in energy Ultraman Nexus killed the giant in one quick strike.

When one the scent they had given to one of their victims to the hospital, it was attacked. With its head damaged, it could no longer alter its beast signal, allowing the forces to find the nest and their maker. After Bugbuzun Growler was destroyed, so was the remains of its brood.

The source of the infestation that plagued Japan, Bugbuzun Grooler (バグバズングローラー Bagubazun Gurōrā) was far stronger than the original one. Feeding on its own brood to absorb the sustenance that they acquired from human prey, the monster went unnoticed for the longest time. Only after the Night Raiders caught on to the brood did they finally bare witness to the real monster as it fed. Knowing its cover was blown, Bugbuzun Grooler ripped itself out of the ground and was on the attack. Night Raider shots, not even their vanisher attack, could stop this beast.

Ultraman Nexus was called forth by Ren, and soon the two were battling inside a Meta-Field. When his energy punch failed to stop the beast, the Unknown Hand again made its presence known and began to convert the area into a darkness field! However, fighting so many times in this, Ultraman used it to his advantage. Absorbing some of the wicked energy into his hand and converting it to light, he fired a beam of powerful energy from his fist. The beam tore into Bugbuzun Grooler's body, quickly making the man-eating monster explode.

Several Bugbuzuns appeared in the World Where The Ultra Flare Occurred after being attracted to the Dark Thunder Energy. They were spotted in an underground parking lot and shot dead by Xio. When one of them was about to attack the trapped Deputy Capain; Sayuri Tachibana, she was saved by Nexus, whom bonded with her and killed the Bugbuzun.

However, one single member managed to escape the onslaught and grew to gigantic proportions the next day by Dark Thunder Energy. Ultraman X tried to attack it but he was easily overpowered by its superior mobility until Nexus/Sayuri came to his aid in Junis form and quarantined the Space Beast in a Meta Field allowing both Ultras to gain the upper hand over it and, eventually, to finish it with their Over-Ray Schtrom and Xlugger Shot respectively. Bond -Unite- 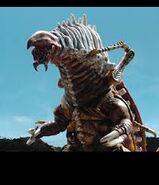 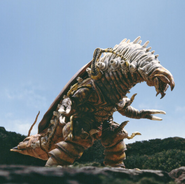 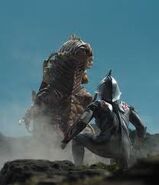 A bunch of Bugunzun Broods. 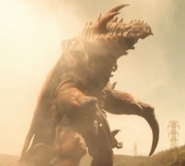 Bugbuzun's suit actor given a drink