None
Bronze Demon (ブロンズデーモン Buronzu Dēmon) is a robot that appeared n episode 6 of Iron King.

In an effort to kill Gentaro, the Bronze Demon was dispatched during a trade with Goro’s life for Takamura Yukiko, the tenth Shadow that had defected to the side of Japan. During the commotion, Goro was given the chance to transform into Iron King. Fighting heroically, the red cyborg was not able to cope with the demon’s explosive personality and attacks. The hero was forced into retreat with his water supply dangerously low.

The bomb robot was not seen again until it was called out for a team battle with Iron King and Gentaro along with Black Knight. They were on the verge of destroying the red giant until Gentaro, using his Iron Belt, managed to tear off one of its grenades and hit Black Knight’s arm it. Then, with the belt again, Gentaro made the two monoliths collide. The collision detonated every grenade adorning the Bronze Demon’s body, causing the demise of both titans in a colossal fireball. 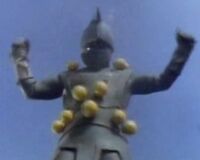 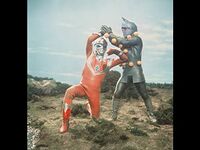 Add a photo to this gallery
Retrieved from "https://ultra.fandom.com/wiki/Bronze_Demon?oldid=510384"
Community content is available under CC-BY-SA unless otherwise noted.