Brocken (ブロッケン Burokken)[1] was a Terrible-Monster that appeared in episode 6 of Ultraman Ace. It was made by Yapool by combining the bodies of a crocodile with a space monster.

Yapool then sent Brocken aboard a space vessel, that was heading home to Earth, hijacking it in the process and possessing one of the crew members, Koyama. While in its host's body Brocken appeared to act normal, but once his host's son found an extra mouth on his hand the disguise was revealed. The son informed TAC, who were quick to take action. When Brocken was found out, he fled TAC until he reached one of their HQs, where he took his true monstrous form and attacked the city with his flames. TAC quickly responded with their gunfire and jets, but they were no match for Brocken's strength. During the fray, Hokuto was caught in Brocken's right arm jaws. Minami ejected from her jet and together they transformed into Ultraman Ace, severing Brocken's right arm in the process. At first, Brocken had the upper hand in the battle with its brute strength and laser attack. Then an Ultra Sign was sent by the 4 Ultra Brothers which encouraged Ace, who managed to stand, and destroy the Terrible-Monster with three Ultra Guillotines, severing Brocken's head, arm, and whips, killing the Terrible-Monster. With Brocken dead, his host was soon free of the monster's control.

As recalled in Ultraman Taiga's past, a modified variant called Re-Brocken (改造ブロッケン Kaizō Burokken) was one of the many members of Gua Army's Mechanized Monster Army under Imbiza's command. Alongside Mecha Birdon, it was ordered to capture Taiga in Planet Maijii as a present to Gua. Both monsters were killed by Andro Ares after firing them prior to his introduction. For Whom Is That Fist For - Part 1 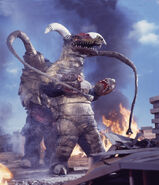 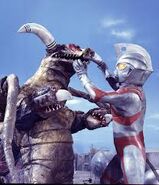 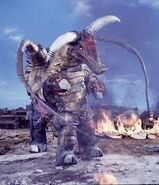 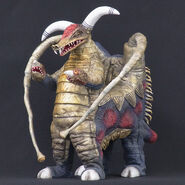