Borr displayed a sassy and outspoken personality. Arguably the youngest out of four, Borr is shown at times to be snarky and a showoff, confident with his abilities and easily annoyed by Utsumi and (to a lesser extent) Calibur's antics.

Borr showed up with the remaining two Junior High students after Anti had defeated Gridman and Calibur. The trio invited themselves into the Junk shop, already aware Gridman was alive. Borr used Rikka's phone to tell Calibur to come out of Junk. Defeat He and the other Assist Weapons continue to fight alongside Gridman and Yuta. Borr entered the battle for the first time when Gridman had to face off against Go'yavec, and combined with him to form Buster Gridman. Provocation

To awaken Gridman's true form, the Neon Genesis Junior High Students gained Acceptors and were integrated back into Gridman for the final battle. After that was over, he departed with Gridman back to the Hyper World. Awakening (Finale)

Acceptor
Add a photo to this gallery
Buster Borr

Combination
Add a photo to this gallery 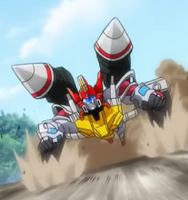 Drill Attack Mode
Add a photo to this gallery

Twin Buster Grid Beam
Add a photo to this gallery

Retrieved from "https://ultra.fandom.com/wiki/Borr?oldid=510370"
Community content is available under CC-BY-SA unless otherwise noted.