Bororo was created after so many failed attempts to destroy Izenborg. Made to mimic him in every way, Bororo, with the help of the Monster Pteranadon, ambushed the D-Force, but was taken down when it was discovered Gottes left out one major detail. He forgot to give Bororo the same powers as Izenborg. 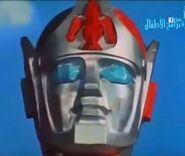