Ultraman R/B episode 17 "Everyone Is Friends"

Booska (ブースカ Būsuka) is the titular main protagonist of Kaiju Booska. He is a mutated iguana whose unusual abilities comes from his crown and later on befriends a mutated squirrel/alien hybrid named Chamegon. At the end of the series, the two departed to space and promises to return 20 years later.

Booska and his series enjoy a huge popularity despite being aired on the same period as Ultraman and he is also a popular icon of Tsuburaya to this day. Booska himself has made several cameos and other shown within the Ultraman Series continuity.

Booska began life as a pet iguana to a Japanese kid named Daisuke Tonda who liked to play mad scientist. He made some kind of food called Kuropara and fed it to the Iguana. This resulted in the reptile growing into a man-sized friendly Kaiju named Booska. Booska and Daisuke would go off on adventures and fight off the monster of the week. The show was incredibly popular for the time, but was off the air in 1967, where, at the end of the series, both Booska and Chamergon went into space in a rocket ship. The show was later revived in 1999 as Booska! Booska!!.

After almost fourty years, the series was revived and Booska once again, with a similar origin story. However, he didn't face as many other monsters as he did in his series and lost his good friend, Chamegon.

Booska and Kamosuke had made a cameo appearance in the special where they worked as a waiter at a restaurant, serving ramen for the trio of human-disguised Alien Miji before they get away after their human disguises wear off, much to everyone's confusion. He also witnessed Ultraman Dyna's battle with Arwon, later against One-Z. Ultraman Dyna: The Return of Hanejiro

Booska is the "Great Leader" of an alien alliance, arriving on Earth with Dada and Pigmon. He was upset that aliens and Ultramen had been fighting for so long, so he wanted to set up a thank you party so that everyone can get along. However, Dada couldn't help himself after learning that the Minato brothers were Ultraman Rosso and Ultraman Blu, and so he fought them after losing his temper. After Dada was defeated, Pigmon went to get Booska and told him about what happened. Booska was disappointed in Dada's behavior and shrank him down into a containment chamber, telling him to think about what he has done. Booska then apologized on Dada's behalf, explained his presence on Earth, and then invited everyone to his next party. Everyone Is Friends

Booska has way too many powers to list. In fact, he may be the strongest Tsuburaya monster to date, mainly due to his limitless powers. When he isn't using his Buu power, he can summon objects, morph objects into something else and even create items. 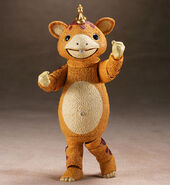 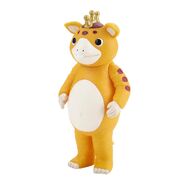 Booska with the soccer team.

Booska as he appears in the stage show. 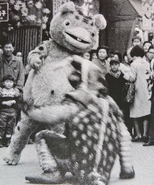 The many faces of Booska

Booska's A, B, and C costumes along with the stage show suit.