Ultraman Saga
Bolgils (ボルギルス Borugirusu) is a Kaiju from Ultraman Cosmos. It first appeared in episode 20 of the series.

Bolgils was a monster that arose from underground to feed on energy. It was first met by opposition from EYES when they tried to subdue the monster with an energy net, but Bolgils's crystal easily absorbed it. After shooting at Musashi's jet in frustration, Bolgils burrowed away feeling threatened. Bolgils rose once again to feed on the energy of SRC's facility. Even after the new invention of the Techno Plasma, Bolgils continued his assault to try and feed. Finally Musashi transformed into Ultraman Cosmos to battle the monster himself, and despite the battle seeming evenly matched, Ultraman Cosmos stopped Bolgils' hunger by sending the monster to sleep with the Luna Pure.

Bolgils was then sent to Kaburaya Island where he would live with other monsters that's rampages were stopped by Cosmos. During his time on the island, Bolgils made good friends with the mole monster Mogrudon. During Chaos Darkness's final attack on Earth, Bolgils (as well as Lidorias and Mogrudon) assisted Ultraman Cosmos in weakening Chaos Darkness long enough for Ultraman Cosmos to purify the evil entity once and for all.

Bolgils would later be seen in the film, Ultraman Cosmos vs. Ultraman Justice: The Final Battle where he would team up with Lidorias, Golmede, and Don Ron in battling against the Gloker armies. At first the monsters had the upper hand in taking down the Gloker Pawns, but were soon beaten and driven off once the Glokers transformed into Gloker Rook.

Bolgils reappears in the series spin-off of Ultraman Orb. In the trailer of the next episode, only the back and tail of the monster is seen. 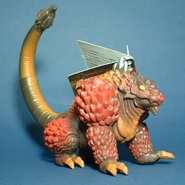