Ultraseven: The Final Chapters episode 3 "The Day the Fruit Ripens"

A biological weapon made in a Remojian laboratory, Bolajo was carried on a Alien Remojo terrorist ship as a fruit to rebel against the peaceful Remojo race.

Then the Remojo police blew up the terrorist ship leaving Bolajo's fruit seed in South America. Then the Ultra Garrison heard about Bolajo's fruit seeds and they tried to destroy them. Bolajo seeds were almost destroyed until Remojo Mu Pyo was absorbed with one Bolajo seed turning it into its true form. Bolajo then trapped Ultra Hawk 3 with its vines. Then one of the Ultra Garrison members, Kazamori, turned into Ultraseven and stopped Bolajo with his Wide Shot. 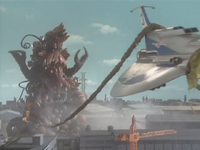 Shock Vines
Add a photo to this gallery 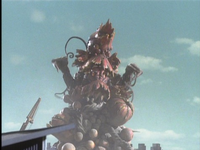 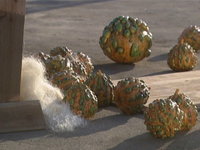 Bolajo fruit seeds
Add a photo to this gallery
Retrieved from "https://ultra.fandom.com/wiki/Bolajo?oldid=510363"
Community content is available under CC-BY-SA unless otherwise noted.