None
Bogun (ブローズ Burōzu) first appeared in Ultraman: Towards the Future, episode 1 "Signs of Life".

The first of many organisms to be mutated from Gudis's virus, Bogun changed his appearence from that of a tadpole to a gigantic brute rampaging through the United States. The UMA was sent to destroy it, but only succeeded in annoying Bogun. Jack was hesitant to kill the beast since it was being driven by the Gudis virus, and not acting on its natural instincts, but he eventually used the Delta-Plasma pendant to turn into Ultraman Great, and fight Bogun himself, to prevent further loss of human life. As the two clashed, Great seemed to have the upper hand, until Bogun used his poison gas. However, the Ultra Warrior persevered and eventually used the Burning Plasma to vaporize Bogun in a fiery cloud. 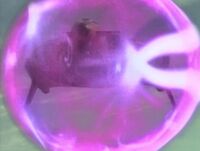 Bogun was released three times in the Ultra Monster Series, also a Bogun was released by Dreamworks. Both were made in 1990. The Bandai Bogun has a light green or yellow color (Depending on the variant), but is only about 5in tall and only has two points of articulation on the legs. The Dreamworks Bogun is 8in taller and is released in a large box. It has four points of articulation, neck, legs, and tentacle. It is dark and lime green. The Dreamworks figure included a sticker of Bogun. Both are "great" figures. 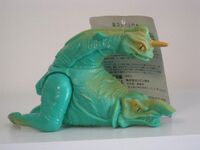 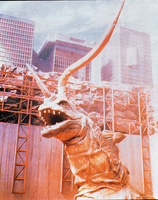 Great vs Bogun and several unidentified kaiju
Community content is available under CC-BY-SA unless otherwise noted.