Bogar (ボガール Bogāru), also called Bogal, is a kaiju that feeds on other monsters. A single member was responsible for the destruction of the Planet Arb, and several members, known as 'Lesser Bogars' appeared and cleared a path for the Emperor to come to Earth. All were ultimately destroyed by Mebius.

In the chronologic prequel to the Mebius series, Bogar first appeared on the planet, Arb. When Ultraman Hikari was out training with Ultraman King, Bogal immediately began to ravage the planet, transforming it into a dead rock. Once Ultraman Hikari returned to find his home under attack he tried to fight off the alien, but Bogal was too strong for him to handle. Arb itself tried to stop Bogar as well, but its efforts were in vain as mass quantities of their spirit was devoured by the alien. An enraged Hikari continued to fight Bogar, but still he was overpowered by the alien to stop her and thus Bogar left Hikari broken-spirited on the dead planet.

Bogar reappeared in episodes 6 through 9 as a recurring villain in the series, Ultraman Mebius.

Early in the series, Bogar disguised herself as a woman to hide from Ultraman Mebius, whom was also on Earth at the time. Bogar was responsible for bringing monsters to the Earth in order to attack it by either awakening them from their sleep or calling forth to them from space. Once Tsurugi arrived on Earth, (Hikari was out for revenge in the form of Tsurugi) Bogar began devouring other monsters whom she had released in desperation to begin building up her body temperature for a massive explosion. Bogar's actions were first discovered by GUYS when they found her devouring some Sadoras. She later appeared at the bottom of the sea to release Twin Tail to lure Mebius into a trap to kill him herself. Sure enough, Ultraman Mebius appeared and after a lengthy fight managed to destroy Twin Tail, but the fight left him exhausted for Bogar to reveal herself to try and eat Mebius. Fortunately, Tsurugi appeared yet again and managed to drive away Bogar.

Bogar appeared again when Alien Fanton's "C-Pin 929" was being transported back to its ship and planned on eating it to become more unstable. Fortunately Mebius appeared on the scene and managed to hold off Bogar long enough for the C-Pin 929 to be transported to safety. Bogar angrily tried to eat Mebius again out of frustration, but was unsuccessful and was forced to retreat yet again when Tsurugi was about to confront her. However during the battle, Bogar's weakness to electricity was exposed and so work was done to improve the abilities of Miclas to help GUYS in battling Bogar. Bogar then appeared in the Tsuruga Mountains where she resumed eating more monsters until she was confronted by GUYS and Miclas. Despite Miclas's improvements however, the Manquette Monster couldn't stand up to Bogar's psychic abilities and was only able to inflict a tiny amount of electricity before disappearing. Ultraman Mebius returned to do battle yet again, but the fight with Bogar was at a standstill until Tsurugi arrived to fight as well. Ultimately, Mebius managed to weaken Bogar enough for him to use the Mebium Shoot, but Bogal managed to molt her skin before she could be destroyed, escaping yet again.

Bogar's last appearance was nearby Fujikita City where she ambushed and ate the monsters Gudon and another Twin Tail, growing more dangerously unstable. GUYS arrived to stall Bogar as she was heading for enter Fujikita City and Miclas was deployed yet again. This time however, Miclas stood a better chance and successfully managed to electrocute Bogar into total paralysis. However, the electric current given off by Miclas instead transformed Bogal into the more powerful Bogarmons.

After absorbing the electricity of Miclas' attack, Bogar had mutated into a much more powerful form known as "Bogarmons" with her new powers, Bogarmons easily beat Miclas and began to assault GUYS directly. Ultraman Mebius appeared to confront the mutated alien, but this time Bogarmons was clearly stronger than in their previous encounters and nearly managed to devour Mebius until GUYS's intervened to stop her. After some pep talk from the crew, Mebius manage to overpower Bogarmons and was nearly able to destroy her until the suddenly appearance of Tsurugi caught him off guard and Bogarmons managed to escape.

Tracing the presence of Ultraman Mebius through Mirai, Bogarmons headed for GUYS's HQ to kill him, however he was intercepted by GUYS themselves and lured to a trap set on an island to protect Bogarmons' explosion from destroying Japan. Bogarmons fell for the bait and was trapped on the island as several guns began firing at her in hopes of destroying her. The guns however were not strong enough and were quickly destroyed by Bogarmons. With no other option, Ultraman Mebius and Tsurugi appeared and worked together to stop Bogarmons while GUYS was ready and waiting to release them by breaching the magnetic field wide enough for them to escape in time. With the two ultras working together, Bogarmons was no match them both and could not escape from her demise until finally she was killed with a combination of Mebius's Mebium Shoot and Tsurugi's Knight Shoot. However her core was agitated by their combined blasts and thus she exploded, but thanks to the magnetic barrier, her body was destroyed without harm.

Lesser Bogar (レッサーボガール Ressā Bogāru) are different incarnations of Bogar that appeared in the series, they appeared in episode 21 and 22.

Lesser Bogars were responsible for opening the Ultra Zone to allow Alien Empera (and possibly the Dark Four Heavenly Kings as well) to enter the Earth's Solar System. They are more savage creatures as opposed to the original Bogar that appeared on Earth. While GUYS was investigating a crashed vessel inside the Ultra Zone, two of the Lesser Bogar attacked them. While they managed to kill one of them, the other proceeded to eat its accomplice and grew to enormous proportions in order to face GUYS itself. Ultraman Mebius luckily appeared and managed to fight off the giant Lesser Bogar until GUYS was able to escape the Ultra Zone and the Lesser Bogar was destroyed by Mebius' Mebium Knight Blade.

However, three more Lesser Bogar managed to penetrate the Ultra Zone and attacked Mirai on earth out of revenge. Mirai managed to kill 2 of the Bogars, but the 3rd one proceeded to eat their remains and grew to its giant form to kill Mirai itself. While it did manage to knock Mirai unconscious, GUYS was called in to deal with the Bogar once again. However after eating 2 of its own kind, this Lesser Bogar was more powerful than the previous one in the Ultra Zone and so manage to ensnarl Ryu or GUYS with its tongue in hopes of eating him in the Ultra Zone. Fortunately, Mirai regained consciousness and transformed into Ultraman Mebius just in time to save Ryu and battle with the Lesser Bogar. Unlike its predecessor though, this Lesser Bogar was too much for Mebius to handle and easily slammed the Ultra to the ground several times with its tongue. With the assistance of GUYS, the Lesser Bogar tried to escape again, but Mebius quickly destroyed it with his Mebium Shoot.

Ark Bogar was one of Alien Empera's servants, and an original member of the Dark Four Heavenly Kings. However Ark Bogar often ignored orders and ravage planets, including the planet Arb, that Alien Empera had sent him to conquer, leaving behind instead dead rocks. Empera sealed Ark Bogar in a blackhole as punishement and he was replaced by Yapool on the Dark Four Heavenly Kings.

However, when Alien Empera died, the seal went with him. Ark Bogar later appears and attacks Ultraman Mebius, Ultraman Hikari, and Ultraseven in his rage through a dimensional portal, but was sent into retreat when the ultras fought back with their own weapons.

The human disguise of Bogar, her appearance is a woman wearing white jacket. Her alias in this form is Bogar Human (ボガールヒューマン Bogāru Hyūman). She still can use her old powers.

Underwater Adaptation
Add a photo to this gallery
Bogar

Skin Molt
Add a photo to this gallery
Bogarmons

Flight
Add a photo to this gallery
Lesser Bogar

Extendable Tongue
Add a photo to this gallery
Ark Bogar 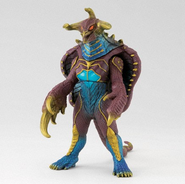 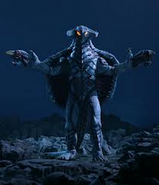 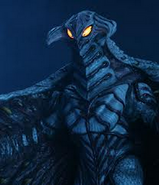 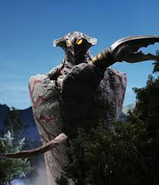 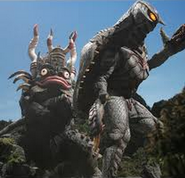 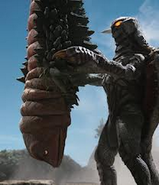 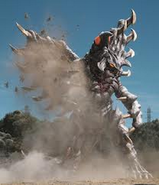 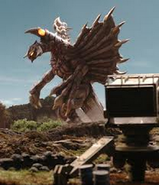 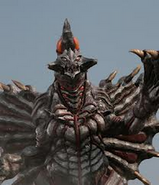 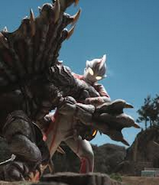 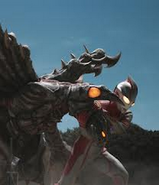 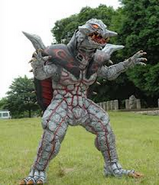 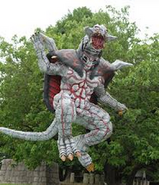 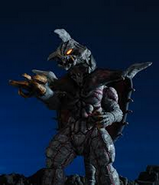 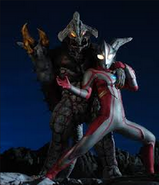 Mebius about to fight Lesser bogar 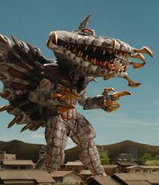 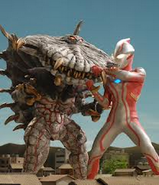 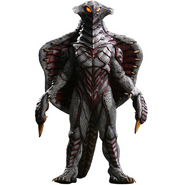 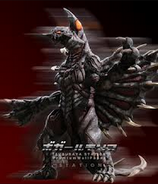 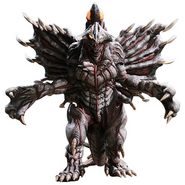 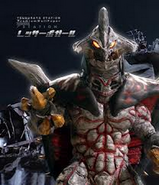 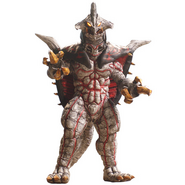 Lesser Bogar concept art
Add a photo to this gallery
Retrieved from "https://ultra.fandom.com/wiki/Bogar?oldid=445450"
Community content is available under CC-BY-SA unless otherwise noted.