Ultraman Wiki
Register
Don't have an account?
Sign In
Advertisement
in: Articles without an official name, Ultra Traits, Crystals

In use
Body Crystals are crystal-like materials on Ultras that usually glow. They are similar to the Light Crystals of the Ultra-Ancient Giants of Light. 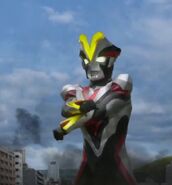