After Captain Ultra was rescued from some fallen rocks by Joe and Huck, Blukong rolled on to the scene in his ball form. The trio ran and hid in the mountains from the creature, while Blukong waited for them outside. Later, Captain, Joe, and Huck came out to combat the beast. Blukong was defeated but not killed instead, he just walked away leaving the heroes alone.

Blukong reappears in episode 7. After fleeing his last battle, Blukong began to wander. The Alien Vandels saw an opportunity, and use their light tower to hypnotize Blukong to once again try to destroy Captain Ultra and his party. However, Blukong was defeated again and returned to human size. Captain and his crew take the now shrunken Blukong back to the Space Station where he was not seen for the rest of the series.

If Blukong is heavily damaged, he will shrink to human size and lose all his powers. 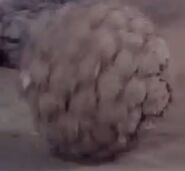