Blizzard (ブリザード Burizādo) is a decapodiformes Saucer Creature from an ice age alien planet. She was summoned by Black Directive in the TV series, Ultraman Leo.

Blizzard awakened and took off towards Earth after being sent by Black Directive. The creature landed, causing earthquakes, altering Gen to the arrival of another of Black’s living weapons. Looking out his window he saw a glow in the distance. On the way to investigate with one of his friends, the two encountered a young girl walking along for seemingly no reason. Suddenly, Blizzard appeared overhead in her saucer form, forcing them to take chase but escaped. When they arrived, she vanished. Blizzard soon landed in a lake in the mountains, diving below the surface and freezing it, and the surrounding area, solid. On their way home, Gen and his young friend discovered several people had been frozen solid. The next day, the boy found the girl again, being tormented by bullies and rescued her, though she knew few words other than her name being Mayuko, the boy grew attached to her and spent the rest of the day with her. But the moment he left her company, the voice of Black Directive came through her doll, commanding her.

He got Gen, who was suspicious of the girl, believing her to be connected to Black. The two investigated the next day, each thing seeming to further prove Gen’s idea. They discovered a man being attacked by the girl’s doll and it attempted to freeze him. Then it attacked them and chased them, trying to do the same. The girl got the doll and tried to attack them but Gen took it away and tried to destroy it. The girl reclaimed the doll and froze a policeman, then ran to the lake, summoning Blizzard from the depths and returning to her, revealing herself to only be a minion of Blizzard. Transforming into her true form, the deep freeze monster prepared for battle. She quickly sprayed her freezing mist on a highway, causing it to shatter. Gen was quick to summon Leo into the battle but he dove on top of his young friend to protect him, getting covered in ice. Leo was frozen and left venerable as the beast stomped towards him but he grabbed a large piece of ice and threw it into the hole in them monster’s stomach. After a short exchange of blows, Blizzard spun around, revealing a second, red face. From her back stomach, she breathed a powerful stream of fire at Leo. Taken off guard, Leo was toppled back through a building but leaped into the air, firing the Dark Shooter, however the monster was mostly unharmed. The two fought and it seemed Leo was gaining the upper hand but Blizzard transformed into her saucer mode, diving into the water and super heating it, causing it to ignite to protect herself. Leo quickly grabbed the Ultra Cape and snuffed out the flames. Leo grabbed Blizzard and threw her high into the air, using his energy ball to obliterate the temperature monster once and for all. 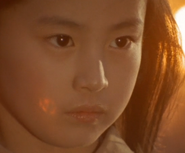 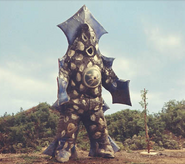 Figure of Blizzard, by Marmit. 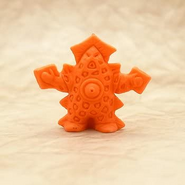 A Blizzard eraser
Community content is available under CC-BY-SA unless otherwise noted.
Advertisement