None
Blitz Blots (ブリッツブロッツ Burittsu Burottsu) is an alien servant created by the Radical Destruction Bringer that first appeared in episode 45 of the Ultraman Gaia TV series.

The motif of Blitz Blots' design is a "Crow Tengu".

The galaxy of M91 was beginning to get annoyed that Earth was still resisting them. After the failure of both Super C.O.V. and Super Pazuzu, Blitz Blots was sent to Earth. Ultraman Agul came to the scene, but was easily out done in combat. Upon using the Photon Crusher, Blitz Blots used the absorber on his chest to hit Agul and soon crushed his Life Gauge after absorbing it's energy. After flying off Blitz Blots returned later that day to be attacked by Team Lightning and Team Hercules. As Blitz Blots was assaulting XIG a second Tigris, born from the spirit of the original, came from underneath the ground to defend the planet. Gamu Takayama turned into Ultraman Gaia shortly after to continue the assault.

After the Photon Edge was nearly hit by Gaia through Blitz Blots's absorber, Team Hercules and Tigris fought as Gaia recovered his strength. After Gaia used the Quantum Stream to overload Blitz Blots's absorber, he turned into Ultraman Gaia Supreme Version and blew him up with the Photon Stream. Shortly after Blitz Blot's defeat, Tigris II dropped to the ground and died from his wounds. 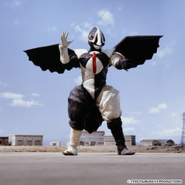 Blitz Blots in a stage show