None, was originally a human named Adana

Once a human named Adana, his name Blast was a nickname given to him for his love of explosives. He was a soldier fighting on the Planet Exile against alien forces where he died in battle. However, his body was struck by a piece of the destroyed Kingdom of Light. Blast was revived and transformed into an Ultra-like being, and instinctively left the planet. He left his world to roam the universe for many centuries seeking the knowledge of where his powers came from. Over the long centuries that he wandered the universe, his body mutated more, growing in size and stature to match those of the people of the Kingdom of Light.

Among these travels, he came across a creature from another Dimension that attacked him and due to his inability to control his Voltic Impact technique, Blast nearly lost his life, was it not a for a red giant wielding a large blade. This warrior fought off the beast and gave Blast the opening to destroy it.

Among his further travels Blast came across three giant machines that were out to destroy him. He soon learn that these three were his old comrades, Corporal Rock, Joe and Jean. With what will was left in them they revealed how they came to be machines. After Blast left upon being transformed by the shard, the three died in that same battle. The lingering Light of Nature, the shard radiated revived them but caused their bodies to absorb all the weapons around them turning them into the battleship Iron Rocks, the gargantuan robot King Joe and Jean-Bot. They wandered the universe and eventually learn of the planet Blast would soon visit and waited for him near the planet.

With no control over themselves they instinctively attacked him, forcing him to destroy them with the Voltic Impact. In the end Jean-Bot was the last to fall and reach out to Blast to convey the feelings of the three but was unable to reach due to exhaustion.

Blast eventually reached a planet, on it's surface he found the ruins of an old civilization by a dormant volcano. He comes across an old man, a native, sitting on top a column who told him the tale of the civilization's near destruction. Blast learnt of how three Giants, Taro, Jack and Ace all followed a shard of the Kingdom of Light, just the one in his chest. They followed it to the same planet he was then on, each hoping to use it to revive a fallen loved one. Their battle raged on for many centuries causing great damage to the planet. Eventually their constant battlng caused a volcano to go active and Jack, being the marksmen, noted that it would soon destroy the young civilization of this planet. Regretting their selfish actions the three threw themselves into the volcano's crater using their power to stop the eruption.

Later, he encountered Luna and Corona, who offered him a choice of their powers. Unlike the previous individuals offered this choice, Blast picked both of them as they combine with Blast, giving him a new power.

Blast soon found himself drawn to the Planet King, in the same vicinity as the former Kingdom of Light. There he was met by a red giant named Leo, who escorted him to the inner sanctum of the King's Temple.

He encountered a giant named Ultraman, who desired to rebuild his home planet. He attacked Blast, intending to kill him to retrieve the shard in his chest. Despite his best efforts his, Blast was defeated and his shard stolen. Deprived of the source of his powers and life force, he fell. Dead, Blast's body floated into the air as a massive regal giant hovered over him, his fate uncertain. 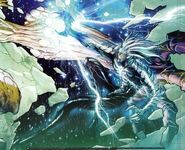 Luna, Corona and Blast in his previously lost human form

Blast merging with Luna and Corona

Ultraman tearing out the Land of Light shard from Blast's body. 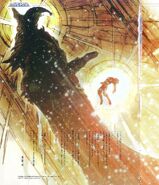 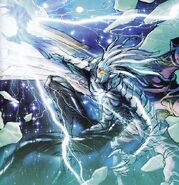