Blackium appeared in the film work of Ultraman, which was produced for planetarium screening in 1998. Alien Baltan did not give up on their conquest for earth. They attacked spacecraft and space bases of humanity one after another. Ultraman is immediately dispatched by Zoffy. Alien Baltan commanded the black hole monster Blackium to fight Ultraman. Blackium got the upper hand by absorbing Ultraman's energy attacks. However, Ultraman Neos and Ultraseven 21 appeared and the three Ultra Warriors defeated Alien Baltan and Blackium.

Blackium reappears in this series in one of the newly shot fight scenes. He first takes on Satanbizor and easily kills him. Zoffy appears and tries to kill the monster, but Blackium got the upper hand and beat Zoffy to the ground. Luckily, GUTS Wing Crimson Dragon and Blue Tornado appeared to assist Zoffy. They flew around Blackium, dizzying the beast, allowing Zoffy to slash him and turn the Kaiju to dust. 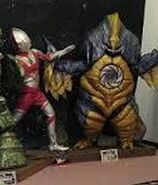 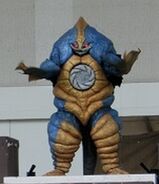 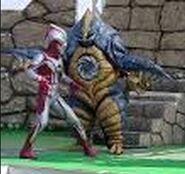