Ultraman Leo episode 46 "Terror of the Saucer Race Series - The Fighting Leo Brothers! The End of the Flying Saucer Beast"

Black Terrina's motif is based on a clam.

After Hungler's destruction, Black Directive called forth the terrible Black Terrina from his homeworld. The monster was quickly on the move towards the planet, ready to do her master's bidding. Upon her arrival on Earth, a shower of strange shells covered the area, no one knowing what they were. But as one man got one out of the water, the shells attacked him and began attacking others all over the cities.

Unknowing of the evil they contained,a young girl began collecting the shells she found but yet they not attacking her as they had others. She soon discovered her mother and called the house Gen was staying at for help. Naturally, the caring Gen was quick to come to her aid and they talked as waited in the emergency room, her showing the shells she'd found, but Gen didn't recognize their connection to his vile nemesis. The girl gave her sick mother one of the shells, as well as some to the nurse at the hospital.

She kept giving them out, unaware she was fact endangering their lives. Later'the shells began flashing, taking over the minds of people that held them. Still others flew to return to their dark master. Those the shells controlled was assembled against Dan, attacking him in the night, alerting Black Terrina to his locations. Black Terrina now knowing the locations to her target, deactivated the shells and sent her followers to home.

Realizing the shells were the cause of this mind control, Dan went in search of the girl, only to be attacked again by more people under the alien's control. He tore a shell off one of the people and was attacked by it, digging into his eye until finally he tore off it and shattered it, the pieces dissolving. Alerting the police to the evil shells they were, the police proceeded to confiscate the shells from all over the city.

Knowing the girl was in grave danger, Gen rushed to the girl, trying to tell her the danger the shells were. Finally, Black Terrina descended on the town, knowing Leo had been wounded and the time was right, taking control of her slaves. Quickly, Leo ran to fight the monster and tossed her into a building. Preparing for battle,the monster opened out her saucer form and attacked, aiming for Leo's injured eye. Blinded, Leo was left at the monster's mercy, slammed and slashed to the ground repeatedly, even lifted to the air and dropped to the ground.

Black Terrina tackled him and the two titans clashed, grappling with each other. Finally, Leo managed to prise open Black Terrina's shell, and began punching her vulnerable organs, resulting in him receiving a jet of the monster's blue blood to his face. Injured, Black Terrina managed to escape and fly off. Following the sound she emitted to control her slaves, Leo fired a Light Ball at Black Terrina, but it bounced off the monster's shell.

Leo ran forward and grabbed the monster and threw her into a power plant, electrocuting the monster and forcing her shell open again. Leo fired the Light Ball for a second time, and this time it hit home. In an instant, Black Terrina was blown to pieces, killing the bivalve monster instantly. Victorious, yet dazed, Leo stood still for a moment before collapsing from exhaustion.

Flight
Terrina Q
Terrina Q (テリナQ Terina Q) were Black Terrina's armies of Sakura Kai (shells that were shaped like sakura petals which believed to be a lucky charm in Japan's believes). 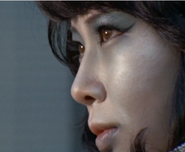 Master of the shells 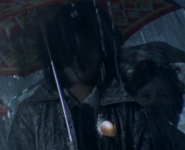 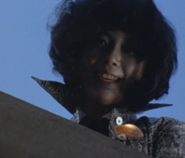 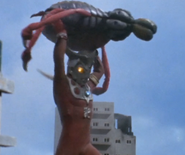 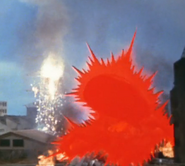 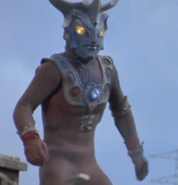