Black Star (ブラックスター Burakku Sutā) is the home world of Black Directive and Saucer Monsters. The entire planet is a living sentient creature.

An unidentified, sentient planet located 10 million kilometers away from Earth, the planet-sized Kaiju was ordered by Black Directive to create and send saucer Kaiju to Earth for his invasion plans. However, all of the monsters sent had been eliminated one-by-one by Ultraman Leo. After the final saucer Kaiju Black End and Black Directive himself were killed, the Black Star made its own effort by throwing itself on a collision course with Earth, but Leo managed to destroy the sentient planet himself.

In Ultraman Mebius, it was revealed that Roberuga was created from remains of Black Star by Alien Empera. 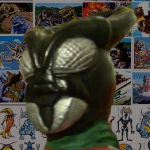