None
Black Satan (ブラックサタン Burakku Satan)[1] is a Terrible-Monster that first appeared in the TV series Ultraman Ace. It appeared in episode 22.

Black Satan was originally a statue that Space Mask (an agent of Yapool), order into constructing it. When TAC discovered his true identity, Space Mask make the creature to live and go to a rampage. It did as commanded, growing into massive size and beginning to attack. The order was given to a circling TAC fighter to attack the monster, but their weapons were powerless. It shot down the fighter using the organic missiles. Hokuto came in a fighter to attack but was likewise shot down by its Combustion Breath. Thankfully, Minami jumped up to fuse with him to form Ultraman Ace. The Ultra proceeded to assault Black Satan but the monster refused to go down and kept attacking the hero. Even help from TAC didn’t seem to help. Even when Ace reflected the the monster refused to get up until a throw seemingly killed it, only for Space Mask to revive it. With new strength, the monster proceeded to beat Ace down. he tore up a house and used it to bash Ace then threw him around like a rag doll, causing his color timer to blink. It seemed as though Ace had finally met his match but soon Space Mask was shot off a building and killed by the TAC. Without his master giving him orders, Black Satan didn’t know what to do, allowing Ace to beat him down and soak him in gasoline. Ace fired an electrical bolt from his color timer, A giant fire fell in to Black Satan . As the monster burned, Ace fired the Metalium Beam and blew the bone was upside down 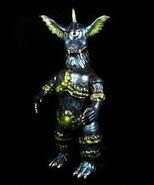 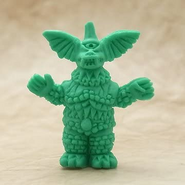 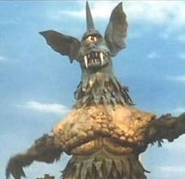 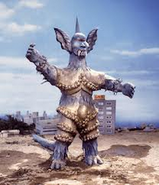 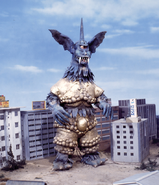 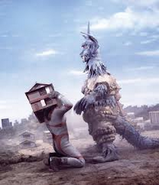