After receiving orders from the tenth Shadow member, Black Knight was dispatched. Arriving at an amusement park, the deadly robot began its assault. To make matters even worse, Gentaro was unable to battle the machine because of fear of Goro’s life. Thus, it laid waste to everything before vanishing into the countryside. The blasting robot was not seen again until it was paired with the Bronze Demon in a colossal battle with Iron King and his human ally Gentaro. Together, the vile monoliths seemed to outmatch the red hero until Iron Kick managed to get the upper hand and hold the dark robot. Taking his chance, Gentaro used his Iron Belt to remove one of Bronze Demon’s grenades and throw it at Black Knight! As Iron King released the damaged machine, Gentaro lashed his belt out again and caused both weapons to collide into one another! The impact detonated every grenade on Bronze Demon's body, resulting in a blast that completely annihilated both of the wicked creations. 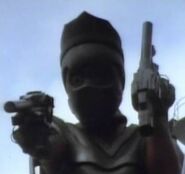 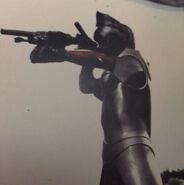 A fullybody image of Black Knight.
Community content is available under CC-BY-SA unless otherwise noted.
Advertisement