Black King (ブラックキング Burakku Kingu)[1] is a Kaiju that debuted in Return of Ultraman. He first appeared in episodes 37 and 38 as the bodyguard of Alien Nackle.

After Seagorath and Bemstar were defeated, Alien Nackle sent out his own Kaiju Black King, who acted as his bodyguard to distract MAT. MAT's weapons were no match for Black King's impenetrable skin, and after a while of fighting Black King soon fled the scene, using a white, gassy smokescreen he exhaled from his mouth,presumably went underground. Hours later, Black King is summoned again as bait to trap an emotionally hurting Ultraman Jack, since a disguised Alien Nackle had killed the two best friends, including the girlfriend of Jack's human host, Hideki Go, while MAT was fighting Black King.

However like MAT before him, Ultraman Jack's superpowers were no match for Black King's incredible hide, and the Kaiju beat down Jack. Alien Nackle appeared shortly afterwards and both the Kaiju and the alien double-teamed Jack until finally Jack collapsed from his injuries and was taken to Planet Nackle for execution. Ultraman Dies at Sunset

Black King was seen in an animated flashback as part of the Monster Army lead by Alien Empera in episode 25 of Ultraman Taro. Burn On! The Six Ultra Brothers

Black King is summoned by a Reionics Alien Shaplay to stop Rei and the Ultra Brothers in their human forms. Rei summons Gomora to do battle and in no time, Black King is killed when Gomora impales him with his horn and then destroys him with a Super Oscillatory Wave at point blank.

Black King reappeared in episode 39 of the series, Ultraman Retsuden, and once again in Ultraman Zero: The Chronicle.

In the director's cut of Ultraman Saga, Black King is seen as one of the many Kaiju revived by Alien Bat and Gransphire to battle against the Ultra Brothers, with Black King battling with Ultraman Jack. Black King fought with Jack for a short period of time, but was eventually killed by Jack's Ultra Lance impaling him as a spear.

In episode 7, Hikaru used him to fight Dark Galberos in a wrestling match but, Black King wasn't winning the fight and he even had to ask Galberos for a break when he was down. He was later swapped out for Ultraman Ginga in round two and he and many other monsters were seen cheering Ginga on.

It first appeared in area T-9, the area Xio were taking to get to the particle research lab, where it started to rampage. Xio tried to stop it with the Sky and Land Musketty and the Ultlaser, but Black King resisted the attacks with his armored skin and fired back at them with his new and improved breath. Daichi Oozora then transformed into Ultraman X to fight Black King. They put up a good fight, but, even with the debut of a new attack, X still was on par with Black King. To make matters worse, Alien Nackle Bandero appeared and grew to Black King and X's size. Together, they managed to overpower the Ultra until Ultraman Zero appeared via dimensional travel. Nackle then ordered Black King to attack Zero but Zero was more than a match for the monster and Black King had his horn chopped off thanks to Zero's Ultra Zero Kick. After that, Bandero took Rui back to his dimension and Black King followed suit.

Later on, it was remodeled into a cyborg, called Black King Drill Custom (ブラックキングドリルカスタム Burakku Kingu Doriru Kasutamu) and he was then summoned by Bandero to stop Zero after he went into his dimension to save Rui. Even though Zero was more than a match for the two of them combined, X arrived in Nackle's dimension, thanks to his Ultraman Zero Armor, and assisted Zero in his fight against the duo by summoning his Cyber Gomora and Cyber Eleking Armor. After Zero defeated Nackle once and for all with his Zero Twin Shoot, Black King was eventually defeated by X's Xanadium Beam, turning it into a Spark Doll for Rui to take back to her own dimension. When the Aegis Shines

In the final episode of Ultraman X, after Greeza destroyed the Xio base, Black King's Spark Doll was absorbed by Greeza. After speaking out to Gomora and striking Greeza right in the center of his chest, Black King, along with all of the other Spark Dolls, traveled to X and united with him. Cyber Black King's power was used to help form the Hybrid Armor and power up the Ultimate Xanadium to defeat Greeza once and for all. Black King, along with the numerous other Cyber Cards and Spark Dolls, then appeared and thanked Daichi as he thanked them. The Rainbow Land

Black King reappeared in episode 10 of the series Ultraman Orb.

His Kaiju Card was given to Jugglus Juggler by Don Nostra in hopes of using this tough monster to finally put down Ultraman Orb for good.

After he fought Gai Kurenai, the Ultra's host, for a while, Jugglus used his Dark Ring to summon Black King while Gai transformed into the Ultra in his Hurricane Slash form. When the two monsters started the fight, they were evenly matched with Orb's speed and agility and Black King's durability and brute strength. Orb then used his Orb Sluggers on the monster, but he knocked them away with his arms which then returned back to the Ultra and he used them to form the Orb Slugger Lance to combat Black King, but thanks to his armored hide, the weapon didn't even leave a scratch on him. After Orb deflected back Black King's flames and the latter endured the attack, Orb decided to transform into his Burnmite form to turn up the heat.

In his fiery form, Orb managed to put up a much better fight against Black King physically. After he dodged the kaiju's flame attack by jumping up and the latter blocked the jump kick soon afterwards, Orb used his Stobium Burst to counter the flames, which resulted in an explosion. However, when the smoke cleared, Black King gave the Ultra quite a surprise with a hard headbutt which sent Orb to the ground, leaving him vulnerable to another attack while his Color Timer started to blink.

After witnessing Jugglus Juggler's supposed death, Orb used the flames used by Black King to use it against him via Stobium Counter Zero and finally put him down for good with his Stobium Dynamite.

Black King was summoned by the power of a Kaiju Crystal by Makoto Aizen. It emerged from underground Ayaka City and went on a rampage as it destroyed a lot of infrastructure with its sheer strength and Hell Magma. Isami Minato tried to transform into Ultraman Blu and take on it alone after an arguement with Katsumi Minato, but after spotting his sister, Asahi Minato, he told his sister to get out of the area, only for him to be trapped under the rubble of a building after it was destroyed by the kaiju's heat ray. Katsumi was about to transform into Ultraman Rosso to stop the Kaiju himself, but before he did, he saw a vision of Asahi trying to save Isami from Black King and after being inspired by his sister's words, Katsumi saved Asahi just in time after she was blown away by Black King's heat ray and pull Isami out of the rubble. After leaving Asahi in their father's care, the two brothers were to transform into Ultramen once again and sent the Hell Magma attack right back at Black King as they touched down after transforming.

Rosso and Blu took on Black King with their Aqua and Flame forms respectfully and while they had the advantage in numbers, Black King's toughness and durability leveled the playing field. After brawling for a short time, Rosso used his Splash Bomb to encase Black King's head and block the monster's Hell Magma attack before it broke out and matched Blu's Flame Equilix in a beam lock which ended in a draw and the fireballs that caused a lot of casulties. After Rosso prevented Blu from firing his beam attack again, Black King tackled them and knocked them down onto a building which got destroyed after they landed on it.

Afterwards, Rosso and Blu switched into their original forms and chopped off Black King's horn. As the brothers' Color Timers began to flash, Blu sent Black King flying up with his Aqua Jet Blast and after Rosso hit him with his Flying Kick, the two brothers sent the Kaiju crashing down with their W (Double) Kick and finally used their Flame Sphere Shoot and Aqua Strium respectfully and the Kaiju exploded in the process and Makoto reclaimed the kaiju's Kaiju Crystal in the aftermath and the two Ultras were finally acknowledged as heroes.

Black King is Alien Nackle Odyssa's battle partner, who once fought against Ultraman Jack with him. They lost, and Odyssa decided to quit being a warrior. He went to Earth to have a peaceful life as an artist named Oda (小田, Oda), and sealed Black King into its egg.

However, Kirisaki takes an interest in Oda's past and Black King's egg, and would like to turn him back to his old ways. Ultraman Tregear appears, causing mayhem and destruction so that he could lure Ultraman Taiga out to battle. Reminded of his past battle and loss against Ultraman Jack, his dormant fighter's spirit briefly resurfaced, allowing Black King to emerge. Under attack, Taiga had no choice but to finish off Black King, unaware who owned it. Seeing his partner destroyed left Oda greatly upset, and finds out that Hiroyuki transformed into Taiga after that.

Using the data of Black King's Spark Doll, a cybernetic/artificial version of it was created and contained in a Cyber Card, namely Cyber Black King (サイバーブラックキング Saibā Burakku Kingu).

Black King became a Spark Doll in the conclusion of the Dark Spark War due to the Dark Spark's powers. His Spark doll fell to Mt. Furuboshi, and found by Hikaru Raido, who kept him as the first addition to his collection. After Dark Lugiel's defeat, Black King's Spark Doll is likely to have reverted back to its original form and depart Earth to return home.

In episode 5 of Ultraman X, Black King was turned into a Spark Doll after X defeated it. It is assumed that Xio currently has it in their possession.

Black King first appeared in episode 2 where he battled Redman. He proved to be a tough opponent, dodging the Red Spear. But he was killed when Redman slashed him with his Red Knife.

Black King's final appearance in Redman was in episode 5, where he fired missiles at Redman, but the hero dodged them. They brawled until Black King fell unconscious. Redman picked up his body and killed him with the Red Fall.

Black King reappeared in the puzzle role-playing game for mobile devices, Ultraman Galaxy as a UR (Ultra Rare) card that you can unlock him in an event called "The Impenetrable Adversary" with a rare chance of getting Black King.

Black King appeared as one of the hosts of New Ultraman Retsuden in the "Spark Doll Theatre" section. He appeared alongside Ragon, Kemur, Thunder Darambia, and King Pandon.

Black King is released many times in the Ultra Monster Series. He has 4 points of articulation and for most of the time, the older figures sport either more black than gold or the other way around until the repaint version which gives it a more accurate look. In 2013 Black King is released as one of the Ultra Monster 500 series and is #8 and stands at 5in. He is also released by Bullmark and Popy. 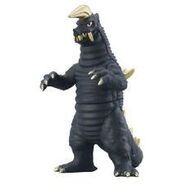 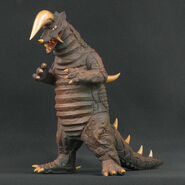 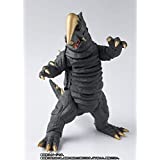 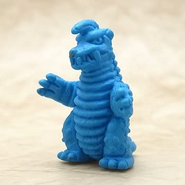 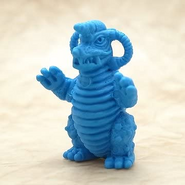