Ultraman Leo episode 43 "Terror of the Saucer Race Series - Challenge! The Terror of the Blood-Sucking Saucer"

Black Garon (ブラックガロン Buraku Garon), also known as Black Gallon[1], is a saucer creature from Ultraman Leo TV series. Unlike most of Black Star's saucer monsters, Black Garon didn't originate there, but was modified by the living planet from an asteroid floating in space.

Disappointed with the pitiful failure of Demos, Black Directive awakened his next creature, Black Garon. Awakening on the surface of their world, Black Garon awakened from his slumber to fly to Earth under his master's command. While out at night, Gen and one of his friends saw what they thought was a shooting star, but Gen soon realize it was something far more sinister. Black Garon soon made landfall, extending his limbs and attacking a power station. The massive beast tore the place apart, stomping towards Gen and one of his young friends. Luckily, Gen rescued the boy just in time and the two hid from the monster. The monster extended his tongue and used it as a whip to assault them and destroy the surrounding area. Having had enough, Gen called Leo into the fight against the monster but Black Garon pulled his limbs in and rocketed across the ground. While Leo jumped over him, Black Garon stood and unleashed his shower of sparks on the hero, burning him badly. As Leo was down, Commander Black called his monster away, pleased with its performance. After this, Black Garon shrunk down to his smaller form. After being commanded by Black Directive to do so, Black Garon transformed, as did Gen and the two tore out of the building, locked in combat. Neither had an edge until Black Garon had his hands blasted by the Ultra Shooting Beam. However, Black Garon regained the upper hand, holding the hero back with his tongue as he tried to fly and threw him to the ground. Garon tried this move again, only for Leo to catch the tongue and slice it in half. With its tongue destroyed, Garon was engulfed in small explosions and soon fell to the ground, dying in a huge explosion. 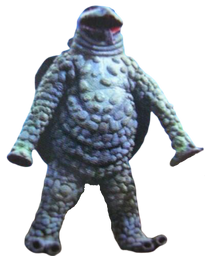 A close up of Black Garon 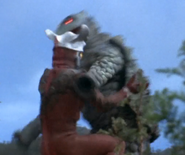 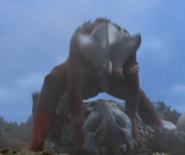 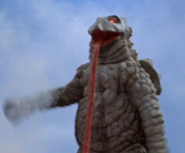 Figure of Black Garon, by Marmit. 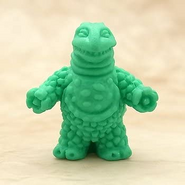